“There’s an incredible pipeline between the College of Law and public service,” says Cook County Public Defender Sharone Mitchell Jr. (JD ’09), who is among many DePaul alumni working to ensure equity and justice in the field of indigent criminal defense. (Photos by Tom Evans)

DePaul College of Law alumnus Sharone Mitchell Jr. (JD ’09), 39, is the youngest person to ever serve as Cook County public defender. He leads a vast public criminal defense office for the Chicago area that protects the rights of indigent defendants who cannot afford to hire private attorneys.

The office’s 450-plus attorneys annually represent tens of thousands of clients accused of offenses from traffic violations and misdemeanors to felonies including murder. In 2021, their efforts contributed to approximately 11,000 not-guilty findings or case dismissals.

We spoke with Mitchell, who was president of DePaul’s Black Law Students Association, about his opinion on representing the underserved, the paths that shaped his career and the pursuit of justice for all.

You’ve been involved with the public defender’s office for years. What does that experience mean to you?

Very early on, first as an intern and then as a young trial attorney here, I got to work with some of the finest attorneys in our state and learn from them. It’s been a great responsibility and honor to represent people let down by so many systems.

Did growing up on Chicago’s South Side contribute to your perspective?

I did not have the prerequisite naivete to believe the untruth that the criminal justice system is just filled with good guys chasing bad guys. Growing up as a young Black man, you learn from a young age that your perception of the police may be a little bit different from that of other folks. I remember seeing sirens in my rearview mirror and being concerned that I could be arrested for no cause, and all the good things I was doing in my life could be derailed.

How did DePaul influence your career path?

There’s an incredible pipeline between the College of Law and public service. Many of the folks I graduated with are serving in the public defender’s oﬃce. Theo Thomas (JD ’09), for example, is our deputy of professional development and teaches the mock trial team at DePaul. Rachelle Hatcher (JD ’09) and Ashley Shambley (JD ’10) are attorneys working on our felony caseload and handling homicide cases, respectively. There are many more.

That pipeline, however, leads to a mountain of work.

We, as a country, have not supported public defense as we should. Our case loads, quite frankly, are out of hand. In the last non-pandemic year, we stepped up on over 100,000 cases. In 2021, we stepped up on about 11,000 cases when there was either a finding of not guilty or the case was dismissed. In a city as large as ours you need a world-class legal defense organization to ensure people’s rights are represented fairly. Luckily, we have leadership in Cook County that supports our budget and growth.

What are the qualities you look for in prospective employees?

This is a job in which you need an incredible amount of empathy. You need people to walk in somebody’s shoes and be able to communicate with them so you can get the job done. We also think about legal skill. A criminal case is high-level work, whether it’s a misdemeanor, a traffic violation or a felony. And we’re also looking at commitment to a cause. Being a public defender takes a unique individual, somebody who believes in the Constitution and that they’re not there to judge what somebody did, they’re there to ensure their clients’ rights are properly defended.

Any advice for DePaul law students considering indigent criminal defense as a career?

Sometimes people can get caught up in the internal politics, getting an A in every class, working on the curve and studying for the bar. All that stuff is well and good. But also thinking about how you’re making an impact outside the walls of that law school is so important. We at the Public Defender’s Office want to give people the opportunity to make that impact, and we’re super excited to bring people on. 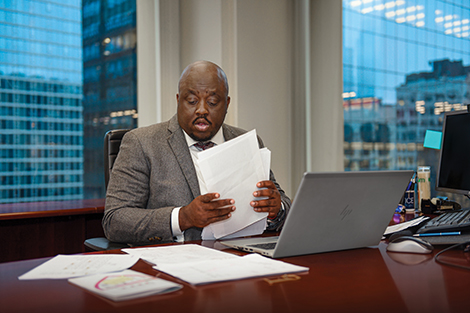 You’ve also served as director of the Illinois Justice Project, a nonproﬁt criminal justice reform organization that helped draft a bill to end cash bail in Illinois. Why is that important?

It was important for us to ensure that people didn’t ﬁnd themselves in jail just because they were poor. We need to change the entire pretrial justice system and make sure that pretrial detention decisions are made more equitably. That bill was passed in February 2021, and the end of money bonds will take place on January 1, 2023.

How do you think the cash bail system connects to the issue of mass incarceration?

I believe that pretrial incarceration is the front door to mass incarceration. When somebody is put in jail before a trial or any formal presentation of evidence, they are far more likely to plead guilty and serve a longer prison sentence. The use of jails has grown incredibly in the last 20, 30, 40 years. The cash bail reforms don’t end jails or pretrial incarceration, but we’re building a system that allows for judges to make better public safety decisions while moving away from the cash bail process that’s robbed millions of dollars out of our communities, especially Black and brown, and from people essentially paying ransoms for their family’s freedom.

Do you think that coerced confessions are a pervasive problem?

Our region has been called the false confession capital of the nation. We have a history of relying on confessions to establish prosecutions. There has been massive misconduct involved in that practice. The public defender’s office has a police station response unit that provides public defenders to individuals in police custody, because we know that people, especially youth, are likely to give statements that are not true. We want to make sure those folks understand their rights and that they are protected.

“The cash bail reforms don’t end jails or pretrial incarceration, but we’re building a system that allows for judges to make better public safety decisions while moving away from the cash bail process that’s robbed millions of dollars out of our communities, especially Black and brown, and from people essentially paying ransoms for their family’s freedom.”

How systemic do you think police brutality is here and across the United States?

Too often we get into conversations about good apples and bad apples. I’m not an expert on police accountability. My work has been more on the court side after there’s been an arrest. What I will say is that we focus too much on individuals and not on systems. I’m sure there are lots of ﬁne people in law enforcement trying to do the right thing, but I don’t think we have a system that breeds quality constitutional policing or is aggressive in rooting out bad behavior.

You’ve stated that laws criminalizing gun possession devastate Black and brown communities and fail to reduce the supply of guns on our streets. Can you explain why you think that?

These are complicated issues that will take complicated solutions. While I am no gun supporter, and I believe the evidence that guns make situations more deadly, I do not believe the path we’ve taken — locking up thousands of people for not having a gun license — has done anything for us. It hasn’t increased or reduced the supply, it hasn’t reduced the demand, and it’s had its own negative impacts. It has created so many criminal records and put people in a position where they can’t provide for their families, which creates a vicious cycle. There are solutions that I think do work to signiﬁcantly reduce the supply or demand for guns, such as violence intervention and holding the gun industry accountable.

Your office is also expanding access to legal representation for people in deportation proceedings through a new immigration unit, formed in alliance with more than 40 immigration legal aid organizations. Why is that important?

I’ve seen the power of how advocates can change the law, and this is an incredible example of that. In criminal court, everybody has the right to counsel, and we believe the same thing should be happening on the immigration piece. We’re trying to find the best path forward for this and hoping the federal government takes the leap and provides universal representation for folks who are in removal proceedings. We know that people get much better and just outcomes when they’re represented by counsel, as opposed to trying to do this alone.

Can equity in education, employment and housing lead to harm reduction and restorative justice?

Addressing root causes is the only way we’re going to get out of this mess. If we are to achieve the safety we all deserve, it’s going to be because people are given the things they need to succeed. We, unfortunately, are living in a world where we turn a blind eye to income inequality, we have failed to hold the gun industry accountable for the untold carnage they’ve enacted in our communities and we’ve abandoned the needs of young people. Investing in communities and in violence intervention — sitting down with young people and ensuring they have alternatives for conﬂict resolution — is the way we’re going to solve this violence problem.