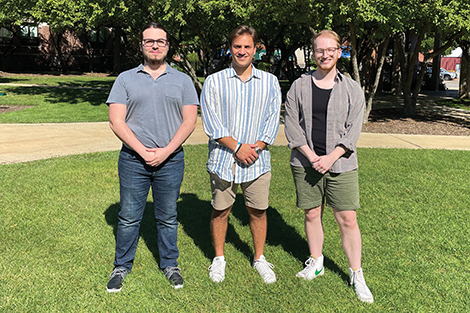 When someone moves to Berwyn, in Chicago’s western suburbs, one of the most useful items they can pick up is the Berwyn Area Community Resource Guide. The magazine has page after page of information ranging from a local government directory to restaurant recommendations. It has the power to bring the city’s community together, yet people who don’t read or speak English have diﬃculty accessing those resources.

Over 60% of the population in Berwyn is Latinx and over 50% speak Spanish, so having a Spanish version of the guide is important for residents. Knowing the resources available at DePaul, the Berwyn Development Corporation reached out to the university’s Translator and Interpreter Corps (TIC).

Communication and Media student Kesniel Ariza translated portions of the resource guide from English to Spanish. “I was a little hesitant at ﬁrst. I was intimidated,” Ariza says, especially since the content included everything from legal terms to advertisements. “When I was translating, I could tell that there was a lot of useful information, so I was happy to help give access to that information to more people.”

The current staﬀ of student workers at TIC work in Spanish, French and German. The program looks to expand its language oﬀerings based on factors such as demand and world events, Shakkour says. In the past, TIC has also provided translation services in Arabic, Russian and Polish.

It’s hard to imagine someone more qualiﬁed than Shakkour for any kind of language service. He has advanced proﬁciency in English, Arabic, German, Spanish and French; intermediate proﬁciency in Italian and Hebrew; basic proﬁciency in Dutch; and some knowledge of Portuguese, Turkish and Korean. He stepped into his role as TIC director in 2019 and not only advises and mentors the student workers but also designs and teaches courses related to translating and interpreting.

Although translation and interpreting both involve moving between two languages, they serve diﬀerent purposes and pose unique challenges for those on the front line of cross-cultural communication.

Translation services speciﬁcally center on written material, much like the Berwyn Area Community Resource Guide. A translator’s job is nuanced because some words and phrases may not make sense if translated word for word.

“Literally, this phrase would mean ‘the passing down of markets,’ but through research and discussion, we came to the conclusion that this meant ‘awarding public contracts,’” Bevevino says.

On the other hand, interpreting happens when those involved are speaking in real time. The quick pace is hard to prepare for and comes with the added challenge of needing to understand speciﬁc dialects.

One of TIC’s regular clients is DePaul’s Egan Oﬃce of Urban Education and Community Partnerships, which focuses on community engagement with many of Chicago’s disadvantaged communities. The program uses interpreters in live sessions it hosts through the Egan Family Engagement and Coalition Initiative, which works with families in the Little Village and North Lawndale neighborhoods.

When these sessions temporarily moved online during the height of the COVID-19 pandemic in 2020, the Egan Oﬃce needed to determine the best way to conduct the sessions through Zoom, knowing that some community members had less technology experience or a slower internet bandwidth.

“Families were not hesitant to say what they needed to say because they knew that this team was going to deliver their message to the other group with ﬁdelity.”
–Mónica Haydeé Ramos

“We learned as we went. Elias and his team were instrumental in our success of the program,” says Mónica Haydeé Ramos, associate director of the Egan Oﬃce.

The student workers were a hit. “Because of their personalities and their professional demeanors, the families felt comfortable with them,” Ramos says. “Families were not hesitant to say what they needed to say because they knew that this team was going to deliver their message to the other group with ﬁdelity.”

By approaching their assignments with compassion and accuracy, the TIC students did more than just interpret. They broke down language and information barriers among Chicagoans and expanded their own horizons too.