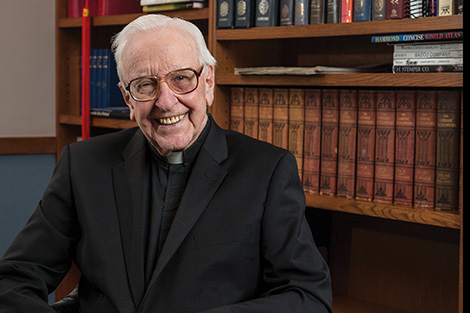 The Rev. John T. Richardson, C.M., a visionary who led the historic expansion of DePaul University during his 12-year presidency, passed away March 29, 2022, at age 98 at the Apostle of Charity residence at St. Mary’s of the Barrens in Perryville, Mo., where he lived in recent years. He served as president of DePaul University from 1981 to 1993 and chancellor from 1993 to 2017.

During his tenure, Richardson’s focus remained steadfast on the university’s mission to provide a quality education to students of all backgrounds, including low-income and ﬁrst-generation students, raising the university’s academic stature and strengthening DePaul’s impact throughout Chicago and the world. Hallmarks of his time with the university include increasing its appeal to students nationwide, strengthening its Vincentian commitment to its urban community and developing the diversity of faculty, staﬀ and the student body.

Richardson joined DePaul in 1954 as dean of the Graduate School. He was appointed to the Board of Trustees in 1954 and remained a trustee until 1995. From 1955 to 1970, Richardson taught jurisprudence in the College of Law. His students included future Chicago mayor Richard M. Daley and dozens of future Cook County judges.

In 1960, DePaul named Richardson executive vice president and dean of faculties, posts he held for 20 and 21 years, respectively. As dean, he established The School for New Learning (now the School of Continuing and Professional Studies), the School of Education (now the College of Education) and The Theatre School, which was originally the Goodman School of Drama. In addition to restructuring and modernizing the undergraduate curriculum, he instituted the university’s ﬁrst doctoral programs in education, computer science, philosophy and psychology. He worked closely with the university’s president, the Rev. John R. Cortelyou, C.M. (CSH MS ’43), to update university governance leading to the establishment in 1967 of a restructured Board of Trustees, largely comprising laypeople, with full powers to govern the university.

Richardson was elected DePaul’s president and assumed the oﬃce in 1981. He said of his tenure, “I would see the era of the ’60s and ’70s where DePaul moved very fast in becoming a true university. I would see the ’80s and ’90s as looking more at our mission.”

He led the university’s $100 million Cornerstone Campaign from the late 1980s to the early 1990s, which spurred major expansions of DePaul’s Loop and Lincoln Park campuses. The John T. Richardson Library, built in 1992, was named in his honor. Under Richardson’s direction, DePaul established the International Human Rights Law Institute, the Institute for Business and Professional Ethics, the Center for Church/State Studies and the Center for Urban Education.

Upon his retirement as president in 1993, Richardson continued to live in the Vincentian residence on campus and served as chancellor for his successors, the Rev. John P. Minogue, C.M., and, following a period of volunteer teaching at the Vincentian mission in Nyeri, Kenya, the Rev. Dennis H. Holtschneider, C.M. In 1994, former Illinois Gov. Jim Edgar inducted Richardson as a Laureate in the Order of Lincoln, the highest honor bestowed by the State of Illinois.

Richardson joins his parents and siblings in heaven, including his brother, the Rev. James Richardson, C.M., former Superior General of the Congregation of the Mission.

Following photos, top to bottom: Richardson at his inauguration as DePaul president, receiving his portrait painting, and addressing the crowd at a DePaul basketball game. 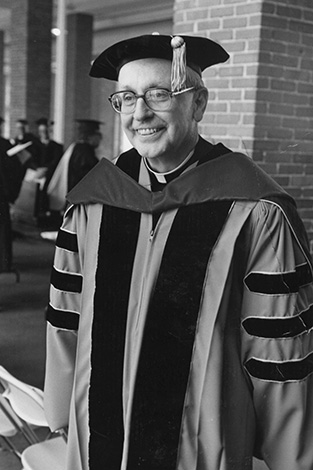 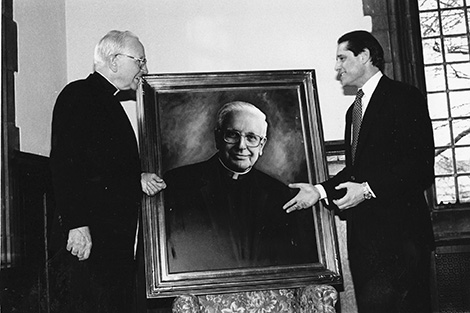 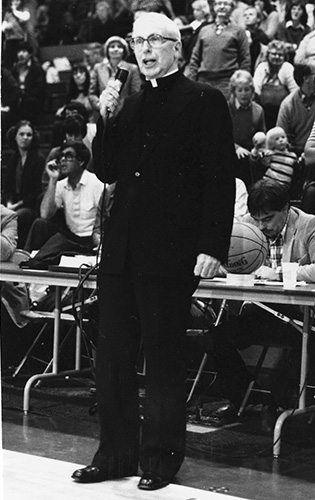 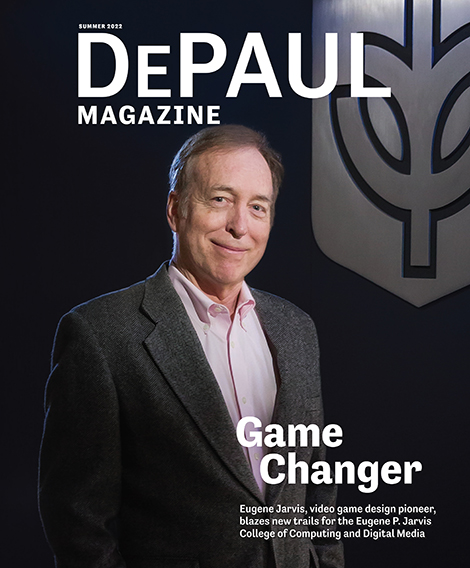