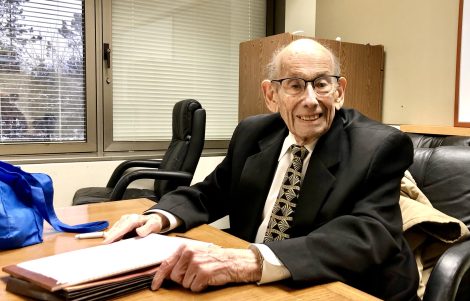 There aren’t many 95-year-old practicing lawyers around, but in the spirit of his motto, “Why not?” Norman Rosen (JD ’50) continues to tend to the legal needs of some loyal clients from his office in the Chicago building where his son, Randy, runs his property management company. Brothers Randy, Mark and Barry, and their families, enjoy visiting with the family patriarch in the Lincolnwood home in which Rosen and his late wife of 67 years, Sally, raised them. When they do, they’re likely to hear stories from Norman’s 71 years in the law, including his recent stint as an arbitrator.

Norman Rosen with wife, Sally, celebrate their 65th wedding anniversary with their children, grandchildren and great-grandchildren.

Rosen got his first taste of work in a variety of jobs. “I was a golf caddie,” he says. “I sold encyclopedias door to door, and I won a gold watch for the most sales in Northern Illinois. I worked for Rock-Ola, a company that manufactured juke boxes. During World War II, Rock-Ola converted to making metal parts that didn’t reflect light for use in Army rifles.”

Rosen also worked for another military supply company, which meant that Rosen was an essential worker and thus, exempt from the draft. “My boss informed me of the good news, and I quit that day. My country was at war! Why not serve the country as a soldier,” he said.

To serve, Rosen had to pass a physical. “I can only see well with one eye,” he said, “so when they told me to hold my hand over my good eye and read the chart with my other eye, I opened my fingers just enough to get a tiny peek. I passed the exam and was inducted into the army.”

The morning he got orders to ship out from Fort Ord in Northern California, he expected to board a troop ship to fight in the Pacific. Instead, he boarded a bus with some other troops and wound up at Letterman General Hospital in San Francisco. When they got to the hospital, they were asked, “Where did you get your medical training?” Their answer? “We didn’t.” After two weeks in an empty barracks, Rosen was put in charge of a wounded soldier unit.

The Army then decided that Rosen and 14 other soldiers should be trained as X-ray technicians at Fitzsimmons General Hospital in Denver. The train car for the overnight trip to Denver had only 14 available seats. Rosen, who was in charge of the group, said he would stay by himself in another car. When he awoke, he saw that the train carrying his men had been decoupled overnight, and train officials couldn’t say where his troops were! Nor could Rosen when confronted at Fitzsimmons by his commanding officer (“Where are your troops?” he was asked. “I don’t know, sir,” was his reply.) Fortunately, they arrived safely the next day.

Rosen also got his first glimpse at his civilian career at Fitzsimmons. When his posting was up, he convinced the commanding officer that because he had a few weeks before he was due back at Letterman, he should be allowed to go home to Chicago for a visit. “That was my first negotiation,” he chuckles.

After Rosen was discharged, he attended DePaul’s College of Law on the G.I. Bill. “At the time I graduated, there were not many jobs for new attorneys,” he remembers. “But I did find a job working for a downtown lawyer. Part of the job was to relieve the switchboard operator when she went to lunch.” 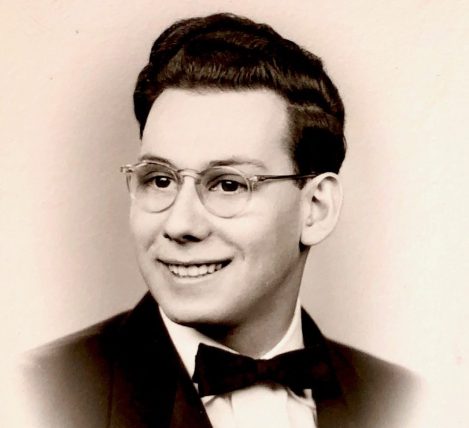 Norman Rosen as a young lawyer

Rosen worked for many years as a sole practitioner, and then joined the Skokie law firm of Ruben Kaplan & Rosen in the 1970s. “I was a true general practitioner and handled all manner of cases—real estate, corporate law, litigation, criminal, trust and estates, and other types of matters,” he says, “I tried to be a very efficient lawyer, to figure out solutions and how to get things done in the quickest, most strategic and easiest manner possible. And I charged reasonably, maybe too reasonably.”

Although he never had many famous clients or cases, Rosen participated in one memorable case as part of a team defending Illinois, Chicago, and the city’s Metropolitan Water Reclamation District in a lawsuit brought by Canada and other Great Lakes states over the diversion of water from Lake Michigan. Because the suit was between states, the case was heard by the U.S Supreme Court. Fortunately for city dwellers, Rosen’s team won and the engineering marvel of reversing the flow of the Chicago River to send waste water away from Lake Michigan did not have to be undone.

After more than 70 years, Rosen is a little hazy on the details of his time at DePaul, but one thing that stands out for him all these years later is Blue Demons men’s basketball. “I watched the games at the Chicago Stadium,” he says. “George Mikan was on the team under Ray Meyer, who wasn’t much older than I was.”

As Rosen reflects back over his life, he is glad he was open to new things—and anticipates more to come. “At 90 years of age, I had a second pacemaker put in. The doctor told me that it would last 10 years. I told him I would see him when I reached 100.” 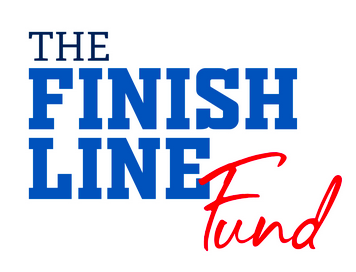