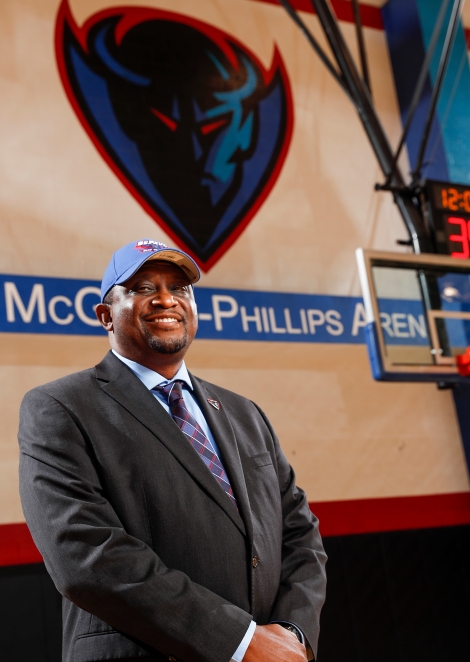 As DeWayne Peevy and his family—wife Allison, 13-year-old son Braden and 20-year-old daughter Kaitlyn—strolled through Lincoln Park this past July, the possibility of becoming Chicagoans and part of the Blue Demon family started to come into focus.

For the last 12 years, Peevy called Lexington, Ky., and University of Kentucky Athletics home. Most recently, as deputy athletics director for the Wildcats, Peevy was a part of the winningest NCAA Division I basketball program in history. Becoming athletics director (AD) of an entire collegiate sports program was the next logical step. That afternoon in July, Peevy decided to apply to the newly open AD position at DePaul.

Peevy had been to Chicago frequently for games and conferences, and he was well acquainted with the BIG EAST and DePaul’s storied history of men’s basketball. What he learned during the interview process, however, was eye-opening.

“I think the biggest thing that surprised me up front were the dreams and aspirations of the DePaul community and the academic prowess of the student-athletes,” Peevy says, about an athletics program that has had a total of 68 programs earn BIG EAST Team Academic Excellence awards over the last 12 years. 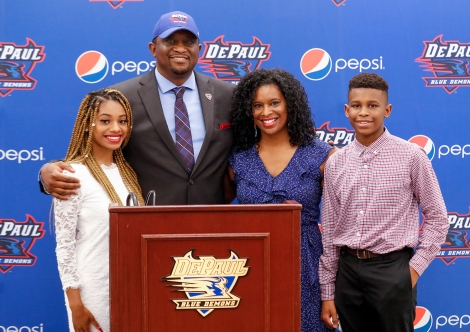 “I quickly learned about the mission of the school that I didn’t know about at all, and that really spoke to me,” Peevy continues. “I’m a servant leader by nature, and so being at a school that’s about diversity of service and first-generation college students just made it a great fit for me.

The feeling was mutual. After a high-profile national search, Peevy was named DePaul’s ninth director of athletics on Aug. 24.

First days on the job

Peevy’s first task was to assess the strengths of the DePaul Athletics Department and determine what pieces he might need to put in place. He was pleased to find that he had not only dynamic, capable staff, coaches, student-athletes and supporters, but also that they were highly motivated to help him achieve his goals. “What I found in this community is that I’m not convincing people of my dreams,” he says. “They’ve had those aspirations, too. I didn’t think that would happen right away.”

“What I found in this community is that I’m not convincing people of my dreams. They’ve had those aspirations, too.”

Peevy’s forte and experience for the last 20 years has been at an elite level in men’s basketball, a sport that has been a sore spot for many Blue Demon fans in recent years. When asked whether that puts added pressure on him to turn the program around, Peevy demurs. “I don’t feel any pressure because this is what I came here for,” he says. “I came here to win championships and because I felt I could help get us in that direction. My nine head coaches that are not in men’s basketball fully understand that men’s basketball success is going to help all of us on campus and uniquely connect our community in Chicago back to DePaul. Enrollment changes, our brand awareness changes and people learn about DePaul and its strong academic programs.”

Brand awareness is a notion that comes easily to Peevy. As deputy athletics director at Kentucky, he assisted Athletics Director Mitch Barnhart with strategic planning, public relations efforts and fundraising. Peevy also was instrumental in the creation of the CBS Sports Classic, including financial negotiations and selection of the teams, the television network and the event management company. Before becoming part of Kentucky athletics’ executive team, he served as the university’s sports information director, and he has more than eight years of experience in media relations with the Southeastern Conference.

For Peevy, awareness starts on campus. He has been meeting with faculty, staff, students and alumni to understand the relationship between the Athletics Department and the rest of the university. His aim? To make athletics a more integral part of university life.

“All we’ve asked in the past is for our students to come support us, but what are we giving to the student body?” he says. “What’s going on in the theatre school or the business school? How can athletics play a bigger role in their success? I want to evaluate that. If we can play a bigger part on campus, then it’s a no-brainer for the rest of the university to come support what we’re doing.”

Every AD wants winning teams, but, of course, desire is only the beginning.

“It’s not just writing a check, and all of a sudden, we’re going to get wins,” Peevy says. “I think success comes as part of a culture change. “We can’t have championship aspirations without investing up to a competitive level. But we also have to have the strategic vision and make it happen.”

Peevy says he wants to be part of the recruitment effort and see what college-bound athletes are being told by recruiters. “From what I’ve seen at my level of experience, maybe I can add to what we’re talking about. We don’t always realize how great we are because we don’t see it from the outside.”

Peevy was unaware that DePaul built and opened Wintrust Arena at McCormick Square in 2017. “It’s a huge asset,” he says. “I spent the last 12 years in Rupp Arena, and, believe me, Wintrust Arena is an unbelievable venue! But if you don’t have the fan experience, you don’t have everything.

“We need to create an environment where fans and people in our community, especially students and young people, have a great experience. Then, when they graduate, they think, ‘I can’t miss the next game. I had so much fun, regardless of result.’ Then once you turn the corner and start having wins versus the losses, it’s a no-brainer. When you’ve got the demand, the ticket revenues go up, corporate sponsorships go up, enrollment goes up and you’re there.

“DePaul still has this niche as an iconic brand in the community because of where it was—being number one in the country—and being on WGN for those years. That’s an advantage that some programs do not have. That’s slowly dissipating. We can’t wait to take advantage of what we still have.”

A role in racial justice

Athletes have a long history of calling attention to racial injustice. Peevy, a native of Birmingham, Ala., helped institute diversity advocacy and student-athlete advisory groups at Kentucky because he thought it was important to see what minority student-athletes, staff members and coaches might be going through.

“As an African American and senior staff member in a predominantly white industry, I found out these young people looked up to people like myself,” he says. “I never really saw myself in that role, but I knew then that I needed to be in a leadership position to be able to motivate and help cultivate different relationships.”

Peevy believes that despite DePaul’s mission of inclusivity, “you can’t take those things for granted. If I feel any pressure, it is what being the first African American in this position means to the city of Chicago and to these young people I mentor every day, and the legacy going forward for other people to follow in my footsteps.”

A new Blue Demon at heart

Peevy’s enthusiasm for DePaul’s mission and the work ahead has him dreaming about wins off the court. “How can we open that door to more young people who don’t understand that this could be their goal to go to DePaul one day?” he wonders. “Maybe they think that’s not an opportunity that’s available to them because they don’t know enough about our mission and who we are.

“Sometimes basketball and other sports lead you there. But there are other things that we’ve got as assets. Young people in our community should be dreaming about going to DePaul as a nonathlete. How do I help with that, help people resonate with that? Because that’s who we are.”