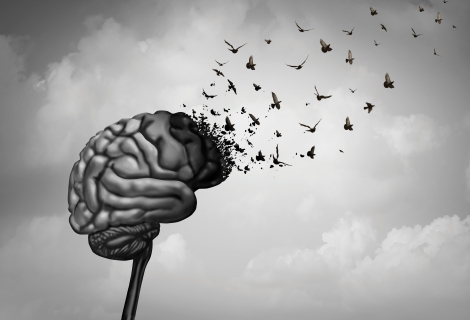 Pioneering research is searching for solutions to a serious health concern

The mouse’s memory isn’t what it used.

Despite having explored the exact same spotted giraffe a mere 24 hours earlier, he approaches the toy as if for the very first time.

Ashley Sanchez, a DePaul research assistant who has been observing the behavior of lab mice as one component of a series of long-term studies in the complicated field of traumatic brain injury (TBI), can explain this lapse: repeat concussions.

“We have found strong evidence that subconcussions—tiny, repeat bumps to the head that don’t produce diagnosable concussions—have an effect on coordination and memory,” she says.

TBI has been recognized by the Centers for Disease Control and Prevention (CDC) as a serious public health concern resulting in death and disability for thousands of Americans each year. The time is ripe for some answers. Thanks to the vision and leadership of Vincent de Paul Professor of Biological Sciences Dorothy Kozlowski, who has teamed with scientists and researchers across the country, DePaul is playing an instrumental role in advancing our understanding of the specific causes and effects of TBI.

“This is a health crisis,” says Kozlowski. “It’s not enough to just tell someone not to do things that result in repeat concussions. The more we learn, the better we will be able to address this crisis.”

Kozlowski is well-versed in the serious consequences of TBI. “Getting hit in the head too many times over a period of time results in a lot of deleterious mental, cognitive and physical effects. There’s also increased incidence of a variety of neurodegenerative diseases, such as Alzheimer’s, Parkinson’s and Lou Gehrig’s, and a degenerative brain disease called chronic traumatic encephalopathy, whose link to repeat concussions was discovered due to its prevalence in professional football players,” she says.

It was the cognitive deterioration and high suicide rate among former NFL players that helped propel TBI into the spotlight. One of the most prominent cases is of former Philadelphia Eagles safety Andre Waters, who took his own life in 2006. An autopsy revealed that his 44-year-old brain resembled that of an 85-year-old man with Alzheimer’s.

By the time the NFL publicly admitted to a link between football and degenerative brain disorders in 2016, the floodgates of public outcry had opened. With the U.S. military and the NHL also under scrutiny, and with parents pulling their children out of contact sports in a panic, the question has become not so much whether there are serious long-term consequences of repeat head injury, but what can be done about it. 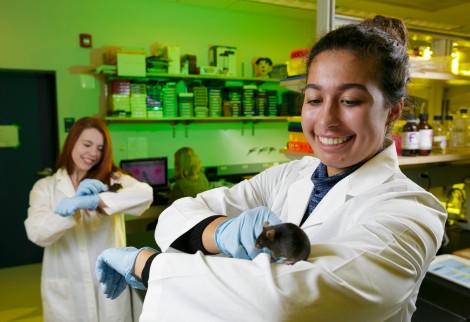 In collaboration with colleagues at DePaul partner institution Rosalind Franklin University of Medicine and Science, Kozlowski developed a novel animal model to study the connection between repeat concussions and long-term health problems. All animals used in the studies are treated in accordance with local and national guidelines on the ethical care and use of laboratory animals.

The latest experiments are using this model to also look at subconcussions to investigate why something as seemingly benign as heading a ball in soccer can create the same serious brain injury as a full-on concussion—and with it the same susceptibility to degenerative diseases. (The short answer is that the head rotation that occurs from even a small bump creates similar biomechanics as a concussed brain.)

Other experiments also looked at gender differences when it comes to TBI, finding that female and male rats show different levels of symptoms depending on the type of behavior measured. Females suffer more symptoms related to motor and balance, while males do worse on tasks of memory and anxiety.

Kozlowski’s colleague in the college’s Department of Health Sciences, Assistant Professor Eiron Cudaback, studies a gene that represents the greatest genetic risk factor for the development of many neurodegenerative diseases. The two faculty members initiated a collaboration several years ago to look at whether this gene makes individuals more susceptible to repeat concussion.

“We have a pretty good handle on what neurodegenerative diseases look like—their pathologic features and clinical outcomes. What we know very little about is the how and why. Our lab attempts to identify and characterize molecular drivers of these diseases so that therapeutic strategies can be thoughtfully and effectively developed,” says Cudaback.

DePaul’s collaboration with Rosalind Franklin, which began as a pilot program in 2013, has continued to blossom in a distinctive way. “We have assembled a team of several faculty members with complementary interests that apply to brain injury, which allows each of us to expand our research base into different but related areas. We’re definitely unique in what we’re looking at collectively,” says Beth Stutzmann, associate professor and director of the Center for Neurodegenerative Disease and Therapeutics at Rosalind Franklin.

Some of the research includes looking at learning and memory on the cellular level for those with Alzheimer’s and TBI, and examining why there can be a long delay between when a brain injury occurs and when a person develops something like dementia, according to Stutzmann.

“It’s not enough to just tell someone not to do things that result in repeat concussions. The more we learn, the better we will be able to address this crisis.”–Dorothy Kozlowski

The team is even close to a few major discoveries. One is identifying an excess amount of calcium on the cellular level for those with TBI. “We haven’t quite connected all the dots yet, but once we have, the end game is to develop either therapeutic interventions or ways to prevent sustained pathology,” says Stutzmann.

One thing Stutzmann and other researchers are quick to note is the complexity of the brain. Still, the implications for this research are huge. “Having an understanding of how to measure brain injury and, from that, identify ways to prevent longer-term effects will impact a very diverse group vulnerable to head injury, from young athletes to military personnel to the aged at risk for falls,” says Stutzmann. “But in order to do that, we have to understand the sequence of pathological events. So that’s what we’re trying to figure out now.”

Although most people associate TBI with athletes or military combat veterans, there’s a hidden population that is even more vulnerable to the ravages of TBI: those who experience domestic violence.

It was at a conference a few years ago, during a conversation with Jonathan Lifshitz, professor at the University of Arizona College of Medicine, that Kozlowski made this discovery. Lifshitz, a neuroscientist, is associated with the Barrow Neurological Institute, the first TBI clinic in the United States for domestic violence survivors.

In fact, the largest potential TBI victim group is composed of survivors of domestic violence. Statistics cited in an article by Lifshitz, Crabtree-Nelson and Kozlowski published in the July 29, 2019, issue of the Journal of Aggression, Maltreatment & Trauma show that one in four women in the United States experience domestic violence during their lifetime. Thus, each year, potentially 30 million women could incur brain injury; of those, 20–27 million will likely show signs or symptoms of TBI.

“Survivors of domestic violence or physically abusive relationships usually suffer many more multiple concussions, even more than pro athletes, due to the fact that they are often living with their abusive partner and aren’t able to get out of that situation easily,” says Crabtree-Nelson. 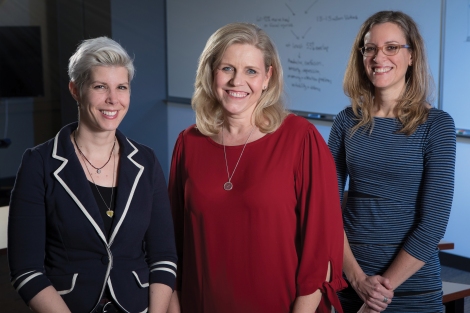 Doris Rusch (formerly of DePaul) and DePaul faculty members Dorothy Kozlowski and Sonya Crabtree-Nelson were among the first to hold a conference examining the link between traumatic brain injury and domestic violence.

In 2018, Kozlowski, Crabtree-Nelson and Doris Rusch, formerly of the College of Computing and Digital Media, launched a conference at DePaul to continue to shed light on the TBI–domestic violence connection. Featuring experts like Lifshitz, it brought together those from the fields of domestic violence and brain injury, and drew more than 100 participants.

One attendee was Kate Lawler, director of the Violence Prevention Program at Swedish Hospital in Chicago, now part of NorthShore, a unique program offering a continuum of care for survivors of domestic violence, human trafficking and sexual assault. “The conference made it clear that there’s an important role for health care providers, in collaboration with other disciplines, to create TBI treatment models that work for survivors of domestic violence,” she says.

Soon after, Lawler convened a multidisciplinary work group at Swedish made up of everyone from emergency department staff to those from rehabilitative services and domestic violence agencies. Together the group considered from a range of angles what happens to someone who comes to the hospital with a head injury that is potentially the result of domestic violence.

“What we’re learning is how difficult it is for someone who is not only experiencing domestic violence but also suffering from the impacts of a head injury to navigate next steps, such as making follow-up appointments. It is not easy to follow a packet of discharge instructions if you have changes to your vision, dizziness and/or headaches. This is where our advocates come in to help,” says Lawler. Complicating the issue is that TBI is easily misdiagnosed, and survivors of domestic violence are typically reluctant to share what is going on at home. 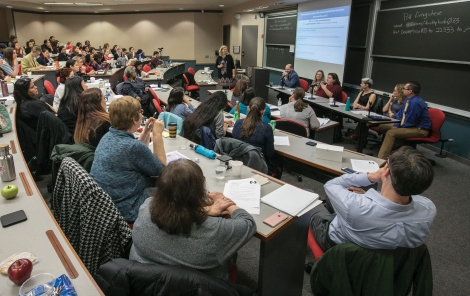 Professor Dorothy Kozlowski, director of DePaul’s neuroscience program, kicks off a discussion during a conference highlighting the link between domestic violence and brain injuries in 2018 at DePaul.

As a result of the conference, Lawler continued to collaborate with Kozlowski, Lifshitz and Crabtree-Nelson. Throughout this process, Kozlowski has served as a consultant, meeting with the group and offering assistance. “I am thrilled that Swedish Covenant has taken on the difficult but important task of shedding light on brain injury in survivors of violence. Our partnership with Dr. Lifshitz in Phoenix is helping us to develop a successful TBI clinic for survivors of domestic violence here in Chicago. As a basic scientist whose work can’t always be immediately applied to patients, it’s very rewarding to me to be able to directly impact survivors of brain injury and domestic violence,” she says.

While much has been accomplished, Lawler admits that their work is only just beginning. “This brings together so many complex and multifaceted issues, from the diagnosis itself and the treatment to the situation of the person and their ability to navigate all of these different systems,” she says. “So while we’re shedding light on something that has existed all of this time but hasn’t been recognized, we don’t yet have a model of care adapted to the realities of a domestic violence survivor’s life.”

Still, Lawler is hopeful about the future. “We’re at the very beginning stages. A lot has yet to be done. Our hope is that ultimately our work and the work of others can raise awareness and create new TBI care pathways for survivors of domestic violence and the folks who are trying their best to help them,” she says.

Combine that with the social work course Crabtree-Nelson is teaching on the intersection between TBI and domestic violence, along with the research underway, and the end result is that TBI is finally becoming more understood. “It’s really exciting to be a part of this,” says Sanchez, the research assistant. “I can see the real-world impact of this research.” 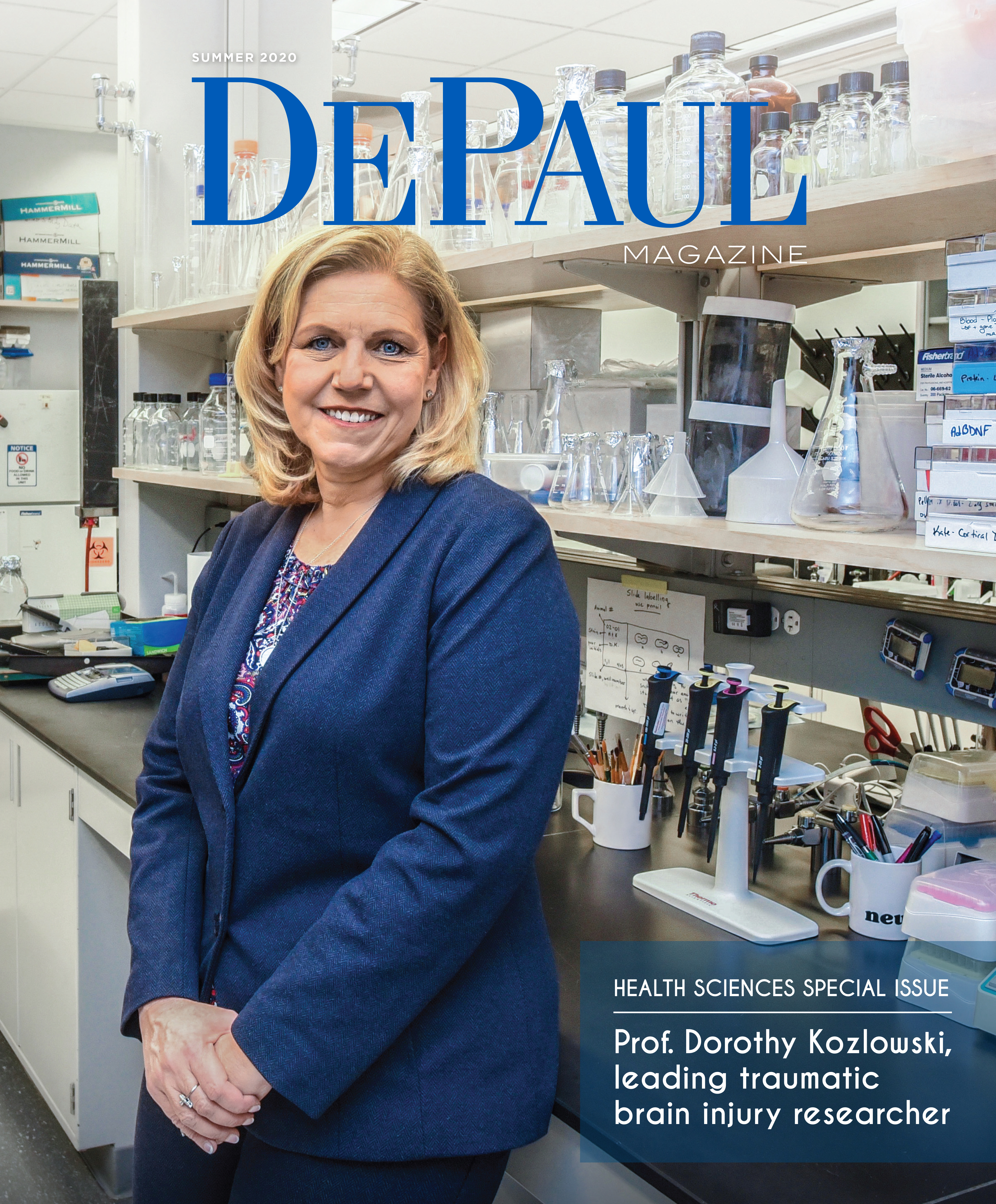