What makes a real difference to musicians who are preparing to perform? If you ask Sasha Gerritson (MUS CER ’99), one component is a state-of-the-art performance venue.

“The opportunity for students to perform in the space they practice in daily is something most college campuses cannot provide,” says Gerritson, director of the opera program at Northeastern Illinois University and a DePaul Trustee who has a certificate in music performance from DePaul. “Our DePaul students, who already receive world-class instruction from the excellent DePaul music faculty, also deserve the finest facilities to work in as they work toward their professional goals.” 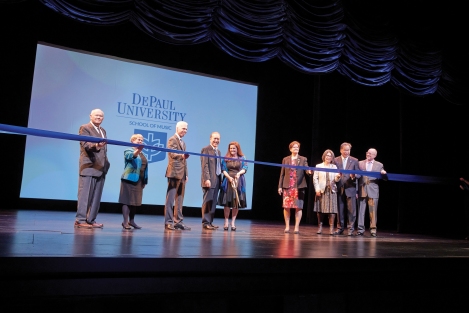 Now, thanks to generous donations by Gerritson and her husband, Eugene Jarvis, a pioneering game developer, president of Raw Thrills and DePaul’s first Game Designer in Residence in the College of Computing and Digital Media, students will have that opportunity. The Sasha and Eugene Jarvis Opera Hall, an extensive revamp of the existing Concert Hall located just south of the new Holtschneider Performance Center (HPC), opens its doors this year.

Building on a world-class program

The School of Music’s conservatory program has an illustrious history of training some of the best musicians in the world. Among the singing faculty have been opera stars such as mezzo-soprano Susanne Mentzer; sopranos Nicole Cabell, Catherine Malfitano and Amanda Majeski; and tenor Neil Rosenshein.

“Over the years, we have placed students on virtually every opera stage in this country and most of the great stages abroad as well,” says Ron Caltabiano, dean of the School of Music. “We’ve had performers at the Metropolitan Opera, the Lyric Opera, the San Francisco Opera, the Dallas Opera, the Houston Opera—every opera stage you can possibly imagine.”

“To be able to have a dedicated space that we could fit out in a way that would appropriately attend to the needs of opera was brilliant.”¬–Harry Silverstein, DePaul Opera Theatre director

“And yet, we have done our smaller productions on a concert hall stage alongside our orchestra without an orchestra pit,” he continues. “At last, we will have a venue that is appropriate for performing a full range of productions.”

The life of Jarvis

The Jarvis Opera Hall started life in 1963 as McClure Chapel. It was built to resemble a New England church by the McCormick Theological Seminary, which was established in Lincoln Park in 1864. More than 100 years later, when the seminary decided to move to its current location in Chicago’s Hyde Park neighborhood, it began to sell off its North Side land and properties. DePaul bought several parcels, including the land on which the chapel stood, in 1976 and 1977. The chapel, renamed Concert Hall, was the first facility of DePaul’s School of Music. It has now been readied as the final performance space of the HPC complex. 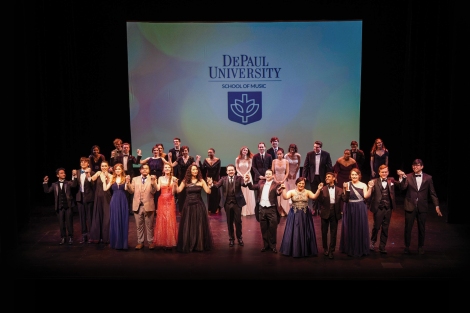 “When the Holtschneider Performance Center was conceived, it had no space at all that was specifically identified as opera production space,” says Harry Silverstein, DePaul’s chair of musical performance and director of DePaul Opera Theatre. But Silverstein, then-School of Music Dean Don Casey and Rev. Dennis H. Holtschneider, C.M., then-president of DePaul, discussed the possibility of renovating the Concert Hall as a space specifically designed for the opera program.

“This was an incredibly exciting thing to hear,” Silverstein says. “To be able to have a dedicated space that we could fit out in a way that would appropriately attend to the needs of opera as an art form was brilliant.”

Architectural firm Antunovich Associates, theatre and lighting consulting firm Schuler Shook, and acoustics and audio video consultants Kirkegaard Associates, all of whom helped create HPC, got to work on plans for the opera venue.

The exterior received only subtle changes made to harmonize with the rest of HPC. The interior of the building, however, was completely reworked. 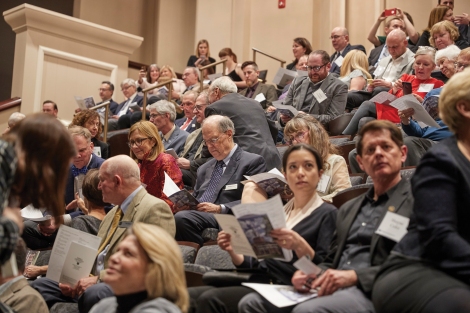 Audience members prepare to see a performance at the Jarvis Opera Hall in the revamped seating area.

An elevated slab was added to support a new 162-seat, tiered seating arrangement. A motorized orchestra pit that can seat 36 musicians was installed in front of the stage; its mobility allows it to accommodate different types of performances and facilitates easier transportation of heavy instruments to and from the building’s newly constructed lower level.

A proscenium built around the raised stage creates discrete zones for the stage and orchestra pit. Catwalks and fly space have been added above the stage for curtains, scenery and lighting that provide a more immersive operatic experience.

The hall also has been fitted with enhanced acoustics, including window upgrades, and acoustically sensitive mechanical and plumbing systems. Theatrical lighting and audio systems are coordinated in a new control booth and dimming room.

In addition, the stage and several areas of the Jarvis Opera Hall that provide comfort and privacy to the performers and audience have been funded by gracious donors. The John and Dale Melbourne Herklotz Stage is where all the magic happens. The Craig A. Sirles Green Room offers singers and musicians a place to make final preparations for their performance.

A thank-you to a dean

In a gesture of gratitude, Gerritson and Jarvis have designated as part of their gift the Donald E. Casey Lobby, which is festooned with painted millwork trim, plush curtains, a terrazzo floor, a chandelier and a monitor that televises the performance for latecomers who have not yet been seated.

“My experience as a student at DePaul in the School of Music was wonderful. It was a transformative experience.”–Sasha Gerritson (MUS CER ’99)

Gerritson wanted to honor Casey, dean of the School of Music from 1996 to 2015, who was so supportive to her when she was a student and continues to inspire her as a mentor. “I admire him very much, and I wanted to recognize his huge contribution to our school,” says Gerritson.

“He was such a strong leader and advocate for students, education and access to education.”
Caltabiano agrees. “None of these buildings in the School of Music would be a reality without the tremendous amount of work that Don did in terms of visionary planning and fundraising,” he says. “My hat is off to him every day for the work that he did for this project.”

When the new Jarvis Opera Hall officially opens, all of the work will have paid off.

“My experience as a student at DePaul in the School of Music was wonderful. It was a transformative experience,” says Gerritson. “Eugene and I are thrilled to have helped make this dream a reality.”

View photos of the construction of the Jarvis Opera Hall here.