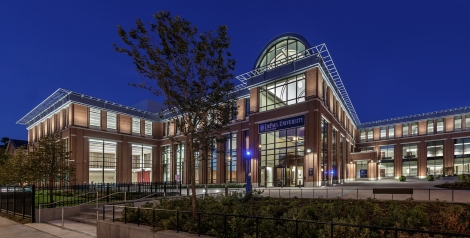 The performance and rehearsal spaces and a state-of-the-art sound technology suite that form part of the Holtschneider Performance Center at the Lincoln Park Campus offer an outstanding environment for learning, teaching and music appreciation. ©2018 balloggphoto.com

Take a look inside the new Holtschneider Performance Center, home of DePaul’s School of Music.

An elegant eastern gateway now welcomes visitors to DePaul’s Lincoln Park Campus. The Holtschneider Performance Center (HPC), the new home of DePaul’s renowned School of Music, opened last fall to fanfare from musicians and music lovers alike. As beautiful as it is acoustically brilliant, it deserves a spot on your must-visit list.

James and Mary Schaefer Hall
Your first stop is the grand three-story atrium. Tall windows capture the rising sun and fill the hallway with light until midday, when the windows at the west end of the main concourse take over. Comfortable couches encourage students, concertgoers and neighbors to linger and chat in the 300-foot hallway that links the east entrance on Halsted Street with the west entrance leading to the Seminary Townhomes courtyard. The architects planned the long hallway to echo the main corridor of the John T. Richardson Library.

The concourse doubles as the lobby for the concert hall and two recital halls and even has a performance venue. At its center rises the main staircase, providing you with elevated views of the atrium, as well as access to the jazz hall and the balcony of the concert hall. You’ll find the box office and the HPC Café—a snack shop by day and a bar during evening performances—in a window-lined alcove just north of the staircase. Take a moment to admire the large stained-glass window of St. Cecilia, patron saint of music, at the far end of the café. Rescued from a church being demolished, the window will grace the planned hallway between HPC and the future music administration building.

Mary Patricia Gannon Concert Hall
The 60-foot ceiling in the Gannon Concert Hall creates the same lush echoes as a cathedral, but you won’t see it. Instead, you’ll see the “walkable cloud,” a false ceiling designed for this building by Joseph Myers, president of acoustic design firm Kirkegaard Associates. Sound and lighting technicians can walk everywhere on the cloud’s surface to adjust the amount of acoustic absorption for each performance as well as desired stage lighting.

Every surface in the 505-seat hall, whether wood, stone or fabric, is crafted with acoustics in mind. The voluptuously curved makore wood balconies on the sides and rear of the hall and the undulating, curtain-like paneling behind the stage were hand-milled to reflect sound at varying angles, eliminating the reverberation often found in a space filled with flat surfaces. By adjusting movable acoustic panels and curtains, the hall can be “tuned” to the optimal reverberation for each performance.

Invisible, but equally important, is the concert hall’s structural isolation as a freestanding building inside the greater structure. Thick concrete walls surround the perimeter, separated by a two-inch air gap from the equally dense walls of adjacent rooms, and the hall stands on its own foundation. This separation successfully prevents sound and vibration from encroaching upon the performance within.

Julie DeRoche, clarinetist and chair of music performance, was one of several faculty members who played in the concert hall so that contractors could tune it for live music. Asked what she thought of the new hall, she replied with a single word: “Magical.”

Notice how the latticework ceiling in this 140-seat hall positions lighting and recording equipment near the stage while allowing the music to rise and reverberate in the open space above. As in the main concert hall, curved surfaces reflect the sound. The versatile room can be adapted to the number and type of performers by adjusting the sound-absorbing curtains high on the walls and the acoustic panels hidden behind the decorative wooden grille, made of white oak, at the back of the stage.

“This is a once-in-200-years building. The special spaces have great finishes. When you go to areas where there aren’t those lavish materials, you’ll still find richness through fabrics and color. The sheer size and volume of the space creates an elegance,” says architect Joseph Antunovich, president of Antunovich Associates.

Look carefully at the windows in this 80-seat recital hall and you’ll notice that some of the panes of glass are not entirely vertical. While the glass itself is flat, the panes are off-set so that music reflects off of the windows at varying angles, again simulating a cathedral-like resonance and preventing excess reverberation. You’ll find similar out-of-plumb windows and surfaces in all the rehearsal and performance spaces.

“With the size of these windows, I’m very impressed that you really can’t hear the street noise out on Halsted,” says Mike Sportiello (MUS ’12), technical director for the new building. He also appreciates being able to control the centralized audiovisual feeds for every performance space from his office. “I can even choose what performers in the dressing rooms hear so they are ready for their moment on stage.”

Dressed in black and steel gray, the stylish 75-seat jazz hall exudes a club-like ambiance. Unlike many jazz venues, it features tall windows that can either be curtained or admit sunlight—or moonlight—as the performers desire. The gray pyramids on the walls diffuse and blend sound. The patterned panels behind the stage are made of sorghum straw, while the curved ceiling is gypsum. These surfaces minimize echoes, which are inappropriate for jazz, and enable the musicians to hear each other clearly.

“Reverberation time is shorter, to emphasize clarity,” says Myers, and sound-absorbing surfaces are thicker, “because a big band can get loud.” The goal is to “control the sound as it dies away so that the overall effect is clear and exciting.”

Behind the jazz hall lies a recording studio overlooking the townhome gardens, an isolation booth so a single performer can be recorded separately, two control rooms and editing suites. Students in the sound recording technology program can tap into the sophisticated equipment built into every performance space to make high-quality recordings.

“This is an incredibly sophisticated, sustainable building,” says Antunovich, noting that it also meets guidelines for Leadership in Energy and Environmental Design (LEED). DePaul is pursuing LEED Silver certification.

Adds Sportiello, “It’s insane to have this much natural light in a recording space. That’s never the case. Recording studios are typically built deep inside a warehouse-like building because you want to be as isolated as possible from the outside.”

Every recital space has hallways and doorways wide enough to admit a grand piano. Some rehearsal rooms are sized to match the dimensions of the performance spaces, while others are dedicated to the needs of particular groups, from small chamber ensembles to the largest percussion batteries. Every rehearsal room features large windows and sound-enhancing fabric surfaces. The building also includes more than 70 small, acoustically separated practice rooms where individual students can play in complete sound isolation. Student lockers are made of recycled plastic, eliminating the clang of metallic doors.

“You can have performances and practices going on in every single room of the building, and people in one room can’t hear [people in] the other rooms perform,” says Antunovich. But they can hear each other a bit from the hallways, which the architects designed so that visitors can hear the music being played.

HPC is the first phase of the School of Music remodeling project. In typical DePaul fashion, student and performance spaces were addressed first. Work is now underway on Phase 2, the remodeling of the old church known as Concert Hall into a dedicated opera performance space. The building, to be renamed the Sasha and Eugene Jarvis Opera Hall, will include a new motorized orchestra pit that can be lowered to keep the orchestra out of sight of the audience or raised to provide extra space on stage if an orchestra is not needed, a raised stage, tiered seating, and enhanced acoustics.

Phase 3 is the renovation of the existing music building, which will have improved administrative and faculty offices, sound-isolated teaching studios and facilities for DePaul’s Community Music Division. 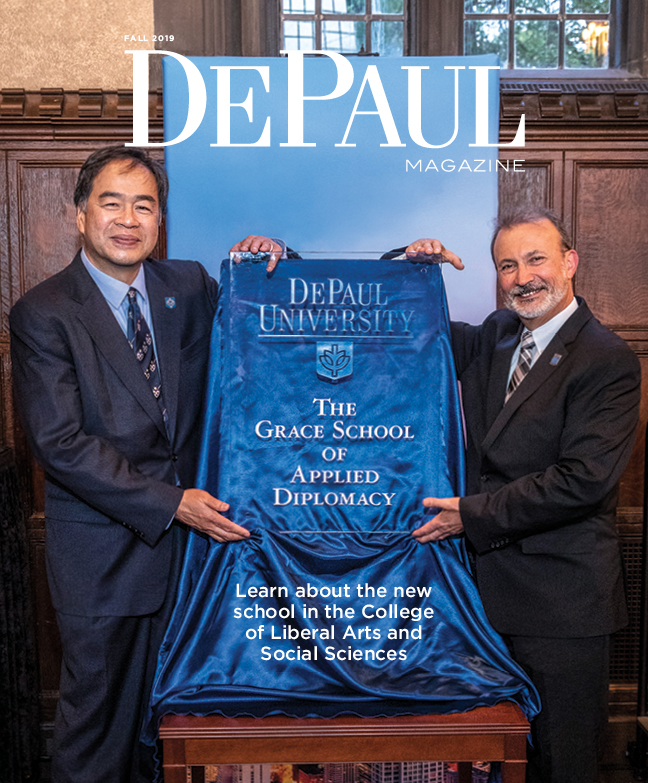