The fall 2017 issue of DePaul Magazine explores the sensory experience of fighting fires. Below, three alumni firefighters explain how their DePaul degrees paved the way for their firefighting careers. 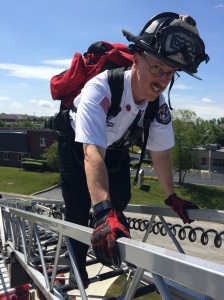 When Joseph Moore (EDU ’89, LAS MS ’08) was wooed away from teaching to become a firefighter, he didn’t expect to end up right back in front of a class. “I had a chief here early on that told me, ‘Hey, what are you doing tomorrow?’ I said, ‘I’m taking a class.’ He said, ‘Pay attention because one day you’re going to teach it,’” Moore recalls. Just like that, his superiors began capitalizing on his teaching and coaching background.

As a lieutenant in the Orland Park, Ill., fire department, Moore constantly draws on the skills he learned in the College of Education. “You’re always teaching someone something,” he says. It might be a member of the public with questions, firefighters in training or a team member trying to figure out new equipment. “Knowing how people think, [as well as] how to teach and coach, makes it easier for me to relate to people as they are learning.”

A marketing degree is also more useful for a firefighter than you might think, says Dave DuVall (BUS ’92), a lieutenant in Dolton, Ill. He uses the marketing skills he acquired as a Driehaus College of Business student to help create a positive reputation for his department in the community, negotiate contracts and promote his union. In fact, he regularly uses all aspects of his degree, from skills in management to leadership, accounting, budgeting, finance and more.

“When I started officer training, I discovered it was basically management classes, with a lot of the same concepts I studied at DePaul,” he says. “You wouldn’t think it crosses over, but it does.” 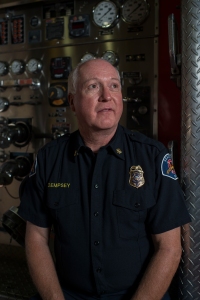 Despite 31 years of experience as a firefighter, Brian Dempsey (SNL ’08) says he couldn’t have applied for his current role as fire chief in Seaside, Calif., without a college degree. “The skills that I gained—critical thinking, writing, communication and collaboration—made a tremendous difference in my ability to function in a chief’s position,” he says. Dempsey joined the Rolling Meadows (Ill.) Fire Department in 1979 and was promoted several times but couldn’t advance further without a college degree. After he graduated from the School for New Learning, he became deputy chief and then fire chief.

As a fire chief, he rarely goes on calls. Instead, he works with the city council and city manager, writes grant requests for new equipment and makes sure day-to-day operations run smoothly. “I still get to fulfill the mission, which is making sure we send out highly trained firefighters with excellent equipment and excellent vehicles,” he says. “All they have to think about is being ready to respond to their next call. I take a lot of pride in that.”

One response to “Why Higher Education Matters in Firefighting Careers”