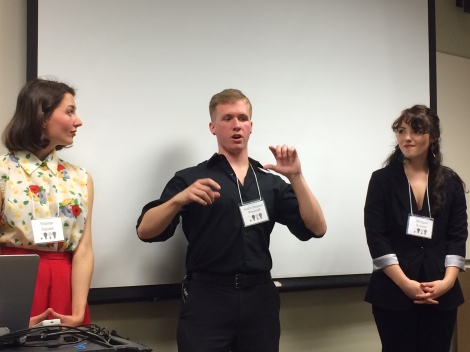 Emma Squier, Austin Shepard Woodruff and Morgan Krause answer questions after delivering presentations at the Honors Student Conference in May.

Nearly 100 students from DePaul’s Honors Program shared their work during the fourth annual Honors Student Conference: Spotlight on Research and Creativity. Friends, family, faculty and staff came together to celebrate the many hours of research and writing that went into each project. Almost half of the students produced a thesis for their senior capstone, and nearly all of those individuals presented their work during small group sessions at the conference. The wide range of session themes, including Health and Justice, Waxing Philosophical, Education and Activism, and Artful Living, offered a glimpse into the diversity and breadth of the students’ scholarship.

The Lost in Translation session featured three seniors discussing language, loss and memory. Learn more in the recaps below.

The literal translation of the French title of Emma Squier’s thesis is “Against Winds, Against Tides,” but as a phrase, it means “against all odds.” She chose this title to reflect the fact that the language of Cajun French is rapidly disappearing, but she believes there are ways to save it, though it may be against all odds.

Squier is herself of Cajun French descent, and she discussed the evolution of the language throughout the past few centuries. “Although this language was maintained for hundreds of years in the United States, in the early 20th century, there was this nationwide movement to unite America under one language and be a true American first, which led to a very strict campaign against all minority languages, including Cajun French,” she noted.

Today, it’s primarily people of her grandparents’ generation who are still fluent. In researching how other minority languages have been able to thrive or bounce back from near extinction, Squier learned that an education-only approach—i.e., teaching the language in schools—doesn’t work very well. The language remains in a vacuum. But when the domain of use can be expanded beyond the classroom into the real world, there’s a better chance the language will survive. Squier sees music as a logical domain of use for Cajun French: “Even in the modern Cajun music sphere, you’re expected to produce at least some of your repertoire in Cajun French,” she said. “This is important because it means Cajun French still holds some vestige of relevance in this domain of life.”

Shepard Woodruff noted that Rodriguez’s historical descriptions of the Latin American novel meld so closely with his personal experiences of Catholicism that “at times we cannot parse out whether he is discussing the novel as an art form or describing his own circumstances.”

The question of language’s slippery power isn’t confined to published books. “I think each of us, in our own experiences, can attest to the ways in which language has either failed us or we’ve tried to use language to overcompensate for our experiences,” he said. “I’m thinking about texts and emojis here—how those often fall so short of what we really want to say or mean to say.”

Student: Morgan Krause
Thesis: What We Make and Leave Behind: Emotionality in Art and Archaeology

Morgan Krause tapped into her double major in anthropology and Spanish, as well as her minor in studio art, to investigate the presence or absence of emotion in archaeology objects. She asked, “Is humanity just the stuff we make, or is it how we feel about that stuff?”

This exploration led Krause to become increasingly interested in personal archaeology. During her research, she began sketching the objects around her, trying to figure out what people find so captivating about them. “When we’re excavating broken pottery or someone’s house, it’s important to remember that people probably felt a certain way about those things they once lived with,” she said, adding later, “You might find 50 nails, but it’s not really about the nails; it’s about the house.”