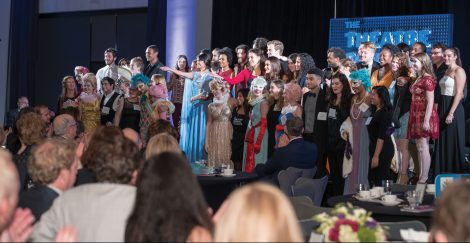 More than 300 donors, alumni, students, faculty and friends gathered Nov. 7, 2016, at the Radisson Blu Aqua Hotel for the annual Theatre School Gala, a spectacular evening of dinner and entertainment that included a live auction and live performances from recent graduates. Since its inception in 1989, the gala has raised funds for scholarships that allow talented students with financial need to attend The Theatre School (TTS). Theatre School Advisory Board Chair Brian Montgomery (JD ’89) noted that, over the years, the gala has raised more than $6 million and provided 1,200 students with scholarships.

The evening’s honorary co-chair, Monsignor Kenneth Velo, delivered the invocation. Playwright and director Kevin Douglas (THE ’00), an ensemble member of Chicago’s Lookingglass Theatre, served as alumni host. He was one of those students, he noted, who “wasn’t sure I could make it through. With prayer and perseverance and the help of generous contributors like you, I was able to receive a scholarship, stay in my program and gain confidence in my craft.”

Christian Edwin Cook (MFA ’16) told the audience that “I consider my Theatre School training invaluable, but the cost of my tuition could be a burden. Thanks to the generosity of donors, I haven’t had to carry it alone.”

The evening was punctuated by a series of lively sketches and scenes fashioned for this year’s DePaul graduate showcases in Chicago, New York and Los Angeles. Gala attendees also screened a video that summarized a recent TTS conference on race relations and the critical role of theatre in sociopolitical discourse.

“The theatre is a reflection of and catalyst for changing cultural dynamics,” said TTS Dean John Culbert. “Our 2016-17 season is an exploration of today’s societal landscape, from race relations and politics to identity and community.”

Culbert praised the contributions of longtime donors and gala co-chairs Joseph Antunovich, Karen Hale and Sondra Healy (THE ’64). Exelon and GEICO were gala sponsors, and PNC Bank is a sponsor of Theatre School productions. 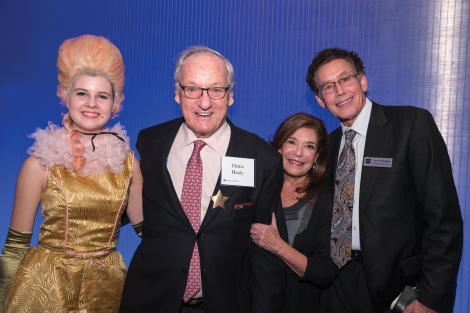