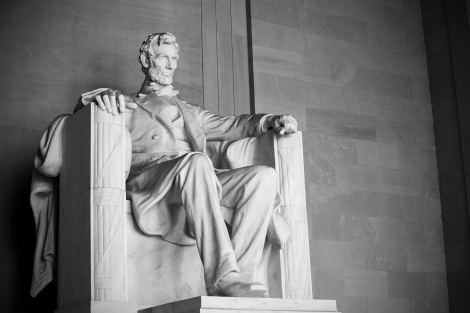 April 15, 2017, marks the 152nd anniversary of Abraham Lincoln’s death, but his legacy lives on in remarkable ways. Three DePaul faculty members in the College of Liberal Arts and Social Sciences took the time to share their thoughts on how the 16th president’s words, actions and deeds continue to shape our world.

Professor of Political Science Larry Bennett on Lincoln’s relevance to contemporary politics:
“Abraham Lincoln’s best attributes should always be relevant, especially for political leaders. He had a respect for language that contemporary politicians could learn a lot from. He was a political leader who attempted to communicate in a way that was inspiring. He was pragmatic, patient and willing to make adjustments based on experience. His style of leadership motivated people, and he was able to communicate that principles motivated his actions. He attached his practical actions to a moral universe that was justifiable and made sense to people.”

Professor of History Margaret Storey on common misconceptions about Lincoln:
“I think that Lincoln is one of the most admired presidents in large part because he is seen as having preserved the Union and ended slavery through the Emancipation Proclamation and the 13th Amendment during the Civil War. He was also one of our most eloquent presidents—the first and second inaugural addresses are among the greatest speeches in American letters—while at the same time being an easy, funny colloquial speaker whose words are accessible to everyday people.

“At the same time, my sense from teaching the Civil War for many years is that there is still a very deep-seated notion that Lincoln came into office aiming to end slavery in the South. This was not the case, but many people have a strong desire to remember his position on slavery and race in a way that brings him into alignment with modern values. However, this position doesn’t help us understand Lincoln, nor does it help us understand the limits of the historical changes that the Civil War brought. Modern historians instead point to the white supremacist world in which Lincoln existed, a world in which he could oppose slavery on moral grounds, yet have no argument with racist hierarchies in American society and see no imperative to create civil equality for African Americans, even after slavery ended. The consequences of that racially defined view of civil liberty—of who was an American with full civil rights and who was not—are still being felt today.

“Personally, I admire him most for his willingness to stand for reelection in the midst of a terrible Civil War, running against a popular general who had a large pro-peace following. Other men might well have declared martial law, or attempted to subvert the normal political processes in other ways. That he didn’t was a real sign of his commitment to the integrity of the Union’s republican form of government.”

Associate Professor of the History of Art and Architecture Mark Pohlad on Lincoln’s relationship to art:
“Lincoln was the first extensively photographed president, though not the first to be photographed. He understood that people needed to see his likeness to be elected. Thus, he was the first president to use the medium of photography—it was new; he was 30 years old when it was invented—in a very modern way. Because the American photographer Mathew Brady took a famous early photo of him, Lincoln liked to say, ‘Mathew Brady and the Cooper Union speech put me in the White House.’ The last photograph Lincoln had taken in Chicago—he loved this city and often had his picture taken on Lake Street where all the photography studios were—is the first to show him with his new presidential beard.

“The first professional artist in Chicago, Leonard W. Volk, made some of the earliest sculptures of him. Lincoln visited Volk’s Loop studio one day where Volk made a plaster cast of his face. Chicago has some of the best Lincoln sculptures in the country, including Augustus Saint-Gaudens’ Standing Lincoln (1887), behind the Chicago History Museum. That one was actually unveiled by Lincoln’s grandson, the last direct male descendant. Another is the sculpture of Lincoln as a young lawyer at the corner of Lawrence and Western avenues in the Lincoln Square neighborhood.”