“Adoration of the Magi”

Have you ever walked into the John T. Richardson Library before sunset and noticed all the colors shining on the walls from the stained glass window of the Adoration of the Magi? If you’ve ever wondered about the story behind it, there’s an app for that: Public Art Chicago.

The free app features a database of public artwork around Chicago. The app, which is GPS triggered, guides users through pre-set tours. If the app is open and someone walks past a featured piece, it will start an audio track. Users can also create their own tours and share them with friends. The app includes more than 4,000 objects in Chicago, all of which are accessible to the public free of charge.

Between DePaul’s Lincoln Park and Loop campuses, the university has six pieces of artwork featured on Public Art Chicago. The Rev. Edward R. Udovic, C.M., secretary of the university, senior executive for university mission, and vice president for teaching and learning resources, notes that DePaul is committed to creating distinctive opportunities for visitors and members of the university community to experience art and artistic spaces on campus. “We have pieces that reflect our institutional values. Our campuses provide unique opportunities to make public statements about who we are as a university,” Udovic says. “These pieces are an expression of our longtime commitment to the arts.” 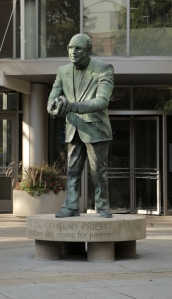 The nine-and-a-half foot tall statue includes oversized hands to lend emphasis to Monsignor Egan’s passion for social and civil rights. The base of the statue features Egan’s challenge, “What are you doing for justice?” to summon people to continue his legacy. The university installed the statue in 2004. Read more about Monsignor Egan in Newsline. Location: Lincoln Park Student Center

Also known as “St. Vincent’s Circle,” the 1995 installation is made of cast bronze. The idea came to Richard Heise (BUS ’57, DHL ’95) as he thought about the values of the university in relation to St. Vincent de Paul. A popular spot on the Lincoln Park Campus, the statue shows St. Vincent de Paul speaking to two modern day students, connecting Vincentian values to everyday life at the university. Location: Between the Richardson Library and the Schmitt Academic Center

“The Vincentian Letter” by Alexander Tylevich

Installed in 2000, the sculpture refers to the history of DePaul and the life of St. Vincent de Paul. The major motif of the sculpture is a pair of bronze elements, which are actually an “envelope” and an “open letter” to be read by all who pass by. The letter side of the sculpture shows St. Vincent, and the envelope portion tells the history of DePaul through an artistic interpretation of archival documents, which include a heraldic cross and an image of the fleur-de-lis (the symbol of France), the university’s Tree of Wisdom logo and a profile image of a young person. Location: DePaul Center Plaza, Loop campus

As seen from the Fullerton stop of the L, the 70 by 36-foot mural is featured on the facade of McCabe Hall on the Lincoln Park Campus. It is composed of images of DePaul faculty, staff and students. Brother Mark Elder, C.M., (EDU ’79), lecturer and service learning coordinator in the Department of Art, Media and Design in the College of Liberal Arts and Social Sciences, created the mural with the help of DePaul students in 2001 as a symbol for what makes DePaul a community. Elder continues to create art pieces around campus. Location: McCabe Hall 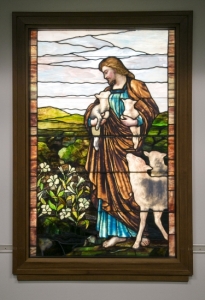 Discovered in an old crate at DePaul in 1990, Tiffany Glass Company originally made this window for a Presbyterian church in Hoboken, New Jersey, in 1900. The piece portrays Jesus as the “Good Shepherd” holding two lambs next to two sheep. Location: Richardson Library, second floor 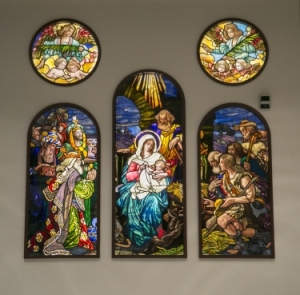 “Adoration of the Magi” by Joseph Flanagan and William Beidenweig

Public Art Chicago is available on the App Store and Google play, and will soon be available on tablets. For more information about the app, visit www.publicartchicago.org

Adapted from an article published in Newsline.