If only these walls could talk. Like any old and venerable institution, DePaul has housed its fair share of secretive nooks and crannies over the years. Come along as we reveal some of the wackiest, weirdest and most wonderful hidden places on campus.

The one predictable thing about Chicago weather is that it’s unpredictable. Luckily, DePaul’s own weather station offers precise readings of current conditions. Located on the roof of the 990 W. Fullerton Ave. building, the 10-year-old station collects and archives data every few seconds. DePaul’s geography department maintains the station, and students use the data for research projects on climate change, lake-effect cooling and related topics.

A shooting range in a church? Shocking as it may be, the basement of St. Vincent de Paul Church once housed a rifle range for members of the U.S. Army Reserve Officers’ Training Corps. The DePaul rifle team, formed in 1953, also used the facility. In this photo from the DePaul archives, the late Maj. Raymond Rau (LAS ’60) takes aim in the basement.

A large gray and green dome rises inconspicuously from the top of Peter V. Byrne Hall. This dome formerly housed the McHugh Radio Observatory, where students would see striking views of Saturn, Jupiter and nighttime constellations through a Newtonian reflector telescope. The observatory was named for the Rev. Daniel McHugh, C.M., a Latin professor who became briefly famous after spotting Halley’s Comet from the observatory in November 1909, several months before the short-period comet was visible to the naked eye. 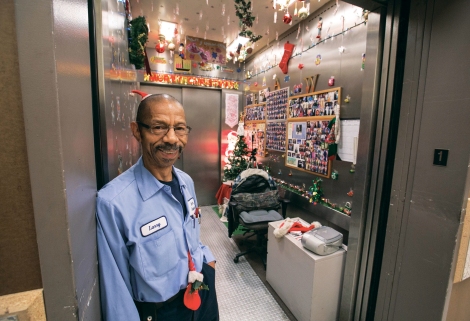 From the outside, the freight elevator in the DePaul Center doesn’t look unusual, but when the doors slide open, a Christmas wonderland is revealed. At the center of it all stands longtime DePaul employee Larry Washington, who has operated this elevator for more than a decade. “I put [decorations] up the day after Thanksgiving and take them down when we come back in January,” he says. For those six weeks, happy riders don Santa hats, pose next to a mini Christmas tree and mug for Washington’s camera. Although Washington doesn’t claim any special affinity for the Christmas holiday, he makes a cameo in many of the photos papering his bulletin boards, and it’s clear from his smile and sparkling eyes that something magical happens here each December.

The greenhouse perched on the roof of the Monsignor Andrew J. McGowan Science Building is especially secret; access is restricted to students who have permission to use the facility for research. Prairie plants and the occasional tomato or corn research crop populate an adjoining rooftop garden.

A bounty of produce hides behind an orange slatted fence on the corner of Bissell Street and Belden Avenue. Peer through the fence to see raised garden beds, picnic tables and a storage shed—this is DePaul’s Urban Garden. The students who cultivate this plot literally sell the fruits of their labor, but they also donate one-third of it because, according to their website, “fresh, organic, locally produced food should be available to everyone.”

Another secluded garden can be seen in the courtyard of the Vincentian Residence on Kenmore Avenue. The Pansza Garden features beautiful potted plants, a bubbling fountain and a statue of St. Vincent de Paul. The garden honors the Rev. Ralph C. Pansza, C.M., who was an avid gardener and enthusiastic participant in the Annual Sheffield Garden Walk.

One response to “Hidden DePaul”