Summer jobs. Teen angst. Unrequited crushes. The upcoming film “Bernadette” embraces these timeless themes as awkward protagonist Archie Kinsler struggles to earn the affections of the title character, an alluring 17-year-old French lifeguard. Along the way, he engages in a risky bargain with fellow Forest Lake Park District employee Dixon, the resident lothario and a local legend. Various other jocks, stoners, nerds and parental figures round out the cast of characters who together capture hope and ennui in suburban Chicago circa 1994.

Project Bluelight, the College of Computing and Digital Media’s professional motion picture production company, green-lighted the film, which was co-written by Assistant Professor John Psathas (CDM MFA ’11) and Lecturer Patrick Wimp (CDM MFA ’09). Both faculty members served as lead producers; additionally, Psathas directed “Bernadette” and Wimp served as cinematographer. For the 15 students enrolled in the six-month Project Bluelight course, “Bernadette” offered an exciting opportunity to work on the production of a feature-length film. “In general, the best and most surreal part of making a movie is watching your words come to life visually,” Wimp says. “But on this film, by far the best part was seeing the growth of our student team from the early days of the project to the final wrap of production. It was incredibly rewarding and made me feel extremely proud.” Here is a glimpse behind the scenes of “Bernadette.” 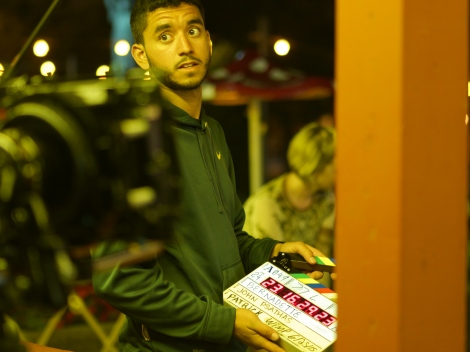 Second assistant camera Josue Ortiz gets ready to clap the slate on location at the carnival. Photo credit: James Psathas

The crew gets ready for a scene on location in Chicago. Photo credit: James Psathas 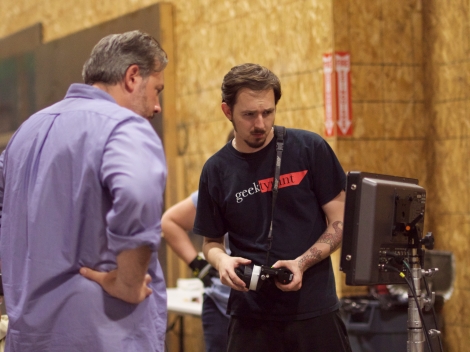