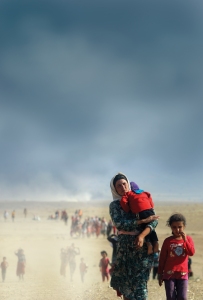 A single, powerful image of 3-year-old Aylan Kurdi’s lifeless body on the shores of the Aegean Sea in Bodrum, Turkey, forced the Western media to take note of the Syrian refugee crisis in September 2015. After more than four years of civil war, approximately 12 million Syrians have been displaced. So far, more than 4 million have faced harrowing journeys to seek asylum in other countries—often to be denied. What is more sobering is that this narrative is part of a much larger trend. In June 2015, the United Nations High Commissioner for Refugees reported its highest level of displacement in recorded history: 59.5 million. Conflicts in Africa, the Middle East, Eastern Europe and Asia largely contribute to this staggering number, which is up 8.3 million from last year alone.

“If you look around, you see so many people being displaced,” says Shailja Sharma, associate dean of the College of Liberal Arts and Social Sciences (LAS), associate professor of international studies and director of the refugee and forced migration studies program. “The issue of refugees exists independently of the Syrian crisis,” she continues. “This is a very small percentage that is getting attention in the media.” Long after the coverage fades, the need for support remains. At DePaul, the new master’s degree in refugee and forced migration studies seeks to address that need by providing students with a hands-on, interdisciplinary approach to offering sustainable support.

A Groundbreaking Program
The first of its kind in the United States, the new refugee and forced migration studies program in LAS offers students the opportunity to study the causes and consequences of forced migration, as well as gain practical experience in the field by working with refugee, government and nongovernmental organizations in the Chicagoland area. “Students get training in law, public service, history, public health and community service,” says Sharma. “They do two sets of internships at the same organization for 100 hours each. They will graduate with a well-rounded sense of what it means to work with refugees.”

Students intern with well-respected organizations like RefugeeOne, the American Red Cross, the Ethiopian Community Association of Chicago, World Relief Chicago, GirlForward and the Heartland Alliance, as well as the Asylum & Immigration Law Clinic at the College of Law. “It allows us to really develop our work in the community and with students in a way that fits with our mission in an area of scholarship on community engagement that is not well developed,” says Howard Rosing, executive director of the Steans Center for Community-based Service Learning and Community Service Studies at DePaul. He continues, “This is a degree that gets students prepared to work with refugees and forced migration issues on the ground with people who are actually involved in supporting and developing structures and policies to support refugees.”

The refugee and forced migration studies program draws faculty from 11 departments across three different colleges at DePaul. “Even though it’s based in LAS, we try to reach across college boundaries, as well as disciplinary boundaries, in order to create a program that reflects DePaul at its best,” says Sharma. Skills like project management, grant writing and overseeing budgets are integrated with historical facts and cultural theories to develop a full understanding of the issues students will face in the field. “Refugee studies is not a discipline,” adds Sharma. “It’s a career.” 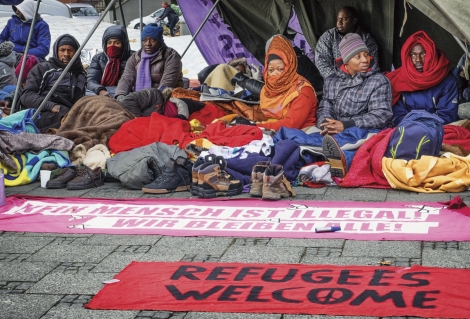 An Interdisciplinary Approach
Asylum, refugee and human rights law classes are among the first courses students take in the program. “Law is a pivotal factor in both the causes and consequences of forced migration. To expose students to these issues, not only from political science and public health perspectives, but also from the standpoint of the legal system, is really important,” says Allison Brownell Tirres, associate dean for academic affairs at the College of Law and associate professor of law. Refugee and forced migration studies students take classes alongside law students to develop a deeper understanding of how the law works. “The classes introduce them to the relevant statutes and treaties as well as to the perspectives of lawyers, lawmakers and other officials who are charged with implementing the laws,” says Brownell Tirres. The program draws upon the College of Law’s existing strength in immigration and asylum law.

Nezih Altay, associate professor at the Driehaus College of Business, offers a business approach to working with refugees by examining humanitarian supply chain management. “The objective of a disaster relief supply chain is different from a commercial supply chain,” explains Altay. “In commercial supply chains, the objective is to cut costs to make it as cheap as possible to move an item. In a disaster relief supply chain, the bigger mission is to save lives, so the short-term objective is to move things as fast as you can. That doesn’t necessarily mean cheap, because fast usually comes with a cost.” Altay and his students analyze supply chains in an effort to instill the importance of good business practices in nonprofits. “We all are good-hearted people,” he says. “We want to help others, but we want to make that help last for a long time. You need to have a good business model that is sustainable to do that.”

The new program also provides a strong grounding in the liberal arts. Rajit Mazumder, associate professor of history in LAS, offers a class on forced migration in south Asia. “It allows people to see how this issue of forced migration has been and has changed,” he says. “It has been with us throughout human history, but the historical aspect of it is to see how under specific circumstances, it develops specific characteristics.” Topics covered include the partition of India, the impact of colonialism and the development of religious traditions. “South Asia is a very interesting area of study,” Mazumder explains. “It has huge migration because of political problems, developmental issues and internal conflicts. People are displaced but not technically refugees because they haven’t left the boundaries of their countries.”

A Well-Rounded Way to Help
Graduate student Addisalem Agegnehu relates to refugees on a personal level. While not a refugee herself, her family is originally from Ethiopia, and she was raised in Sudan before moving to the United States. “We went through the same experiences as someone who seeks asylum would, so in the back of my mind, I’ve always wanted to help refugees,” she explains. Agegnehu was a case management intern at the International Institute of New England in Boston before coming to DePaul, but she always felt like something was missing. “I got refugees the basic things they needed, like Social Security cards, food stamps and information about health clinics,” she says. “But at the end of the night, I would go home, and I always had this voice in me, this feeling that it just wasn’t enough.” Agegnehu began researching graduate programs so she could better understand and offer help to those in need.

“A lot of students ask if they should just go into the field to help or do this program,” says Sharma. “This program really prepares you to do something important and meaningful. It’s not just taking food to people, but organizing a steady supply of food. It gives you the skills to cope with the emotional side because the rates of burnout in working with refugees is high. Showing people how to do the practical stuff is important. It allows people to understand this is not just an emotional issue. It’s a practical issue, as well.”

With the European migration crisis showing no signs of slowing down, this work is more important than ever. “The phenomenon of forced migration is only going to get worse in the future because of climate change and the resulting civil unrest,” says Brownell Tirres. “Refugee issues are found in every country around the world. It’s wonderful that DePaul is offering a program that can prepare students to work with refugees and to find creative solutions to these pressing problems.”

Read more from students in the refugee and forced migration studies program. >>

Learn more about the master’s in refugee and forced migration studies program. >> 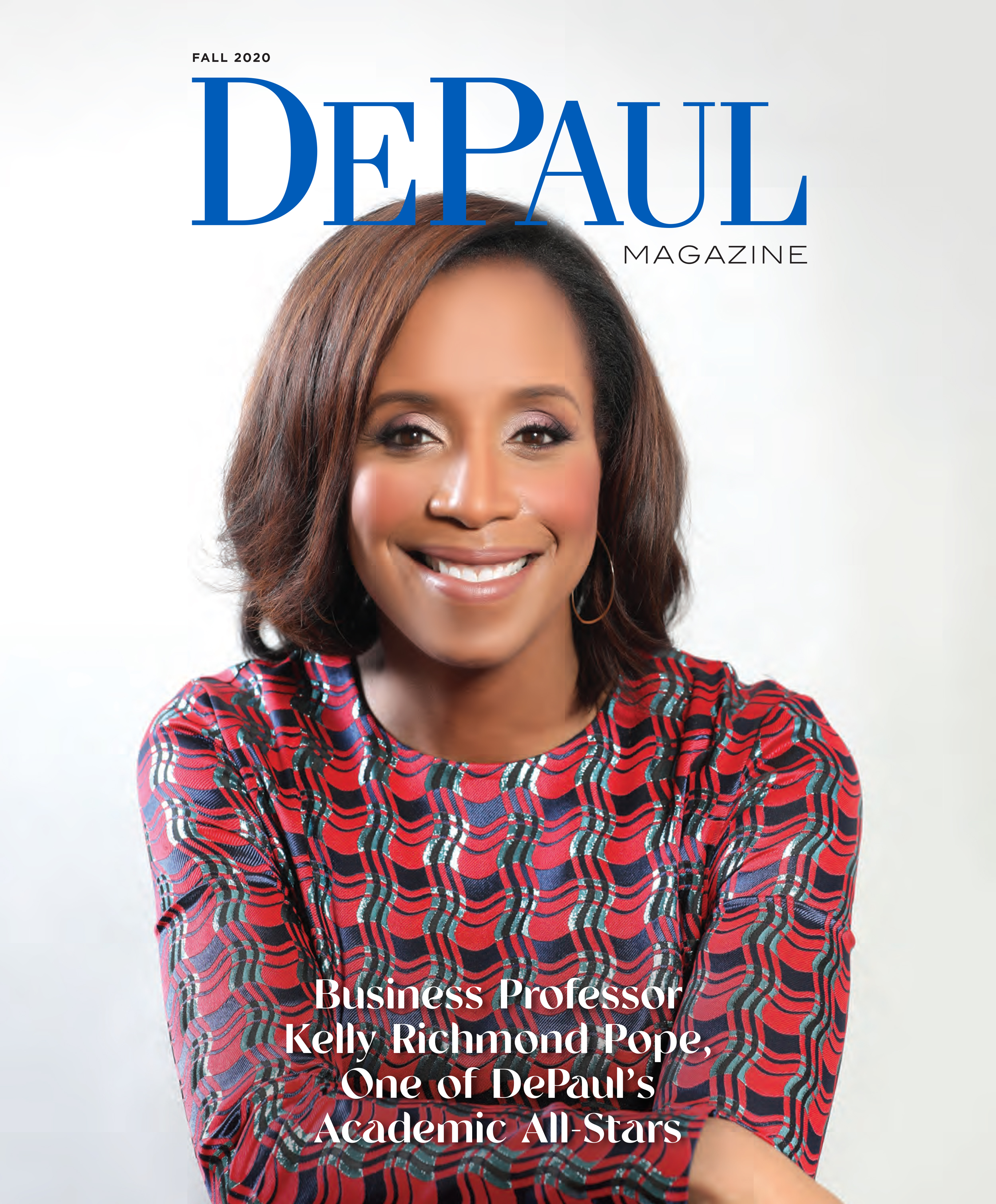