Most people outside the discipline think geography encompasses nothing more than putting borders and place names on maps; in fact, those basics barely scratch the surface. The Association of American Geographers (AAG) has 60 specialty groups, including communication geography, cyberinfrastructure, economic geography, the geography of religions and belief systems, and health and medical geography. Among the research presented at AAG’s 2015 Annual Meeting (see bottom of article) were “Change in Access to Parks in Seattle, 1990-2010: Implications for Gentrification,” “Diverse Suburbs and Nativism in Public School Education,” “Tracking Transnational Hazardous Waste Trading: Methodological Problems and Partial Solutions” and “Changing Recruiting Patterns of the Southeastern Conference: The Impact of Missouri and Texas A&M since 2012.”

It can be difficult to grasp that the spatial intelligence at the heart of geography affects almost everything, and therefore geography can encompass virtually any topic. Nonetheless, the sheer variety of the work geographers do and their own enthusiasm for the discipline’s multifaceted nature provide persuasive evidence that what Patrick McHaffie, associate professor of geography at DePaul, says is true: “In geography, we wake up interdisciplinary and go to bed interdisciplinary.”

Big data
“Big data” is a term usually associated with immense databases from which businesses gather intelligence on human behavior and transactions. The really big data, however, are visual data captured via remote sensing and analyzed using geographic information systems (GIS) to understand relationships, patterns and trends for a wide variety of natural and manufactured phenomena.

“Remote sensing is the imaging and measurement of reflected radiation—light—and emitted electromagnetic radiation—heat,” says McHaffie. “There are literally hundreds of satellites in orbit that are sensing the earth 24/7. Our department works with images from the U.S. Geological Survey’s Landsat program, which images the entire planet every 16 days.” Landsat, the longest-running satellite imaging program in existence, began in 1972, and its vast, free, public-domain archive of images is available to researchers in agriculture, cartography, geology, forestry, regional planning and other disciplines all over the world. “With anywhere from six to 11 channels [wavelengths] for each digital image, we can code more than 281 trillion possible colors or values for each 30-meter square of image,” he says. Google Earth images are a product of remote sensing.

Mike Jersha (LAS ’13), left, works with big data as a data specialist and support analyst at Forum Analytics LLC, a predictive analytics consulting firm founded by an urban geographer. Jersha says, “A lot of what I do is working with different geospatial data for use in mapping systems. I handle certain files of millions and millions of records to create maps that integrate predictive models developed by our team of statisticians.” The combined data help the firm’s clients plan business strategies.

One of Jersha’s recent projects involved building a mapping system for a furniture retailer. After gathering the addresses and geographic coordinates of the retailer’s various locations and those of their known competitors in digital form, Jersha put them on a digital map that uses Google Maps as a base. “Then the statisticians ran different analyses to see how important it is to be near their competitors, how much effect it has on their business and whether an area has a high furniture-buying potential and isn’t saturated yet,” Jersha explains. “Based on client feedback, we either looked deeper into that area to find new concentrations of relevant factors or moved on to the next area.” 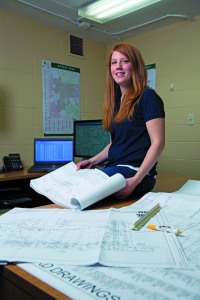 GIS
Every time you check a map on your global positioning system, consult a real-time transportation timetable on your smartphone or share your location using Foursquare, you are tapping into the power of GIS. Personal applications like these abound, but government agencies, businesses and nonprofits rely on GIS as well. The U.S. Department of Labor regards the geospatial technology sector as one of the three technology areas that will create the greatest number of new jobs over the next decade.

Crystalyn DelaCruz (LAS ’07), left, GIS coordinator for the Village of Lisle, Ill., says, “I support all the departments of the village government, from making street and zoning maps to utility atlases. The village needs spatial data and maps to help make decisions.” Lisle established the GIS division in 1999, and its mature, robust system keeps DelaCruz busy managing its server and desktop software, web and mobile platforms, online maps and mobile apps for the village’s field crew. “Whenever a property is annexed, I change the map boundaries, and I maintain information on underground utilities, sewers and storm water basins,” she explains.

In addition, DelaCruz has taken on special projects. When the emerald ash borer moved into Lisle, DelaCruz drove and walked every street in town to locate all its ash trees. She now maintains a map of trees that have been treated for the pest and those that have been removed or are scheduled for removal. Eventually, the village arborist will use her maps to assist with replanting.

Pest control is the primary concern of Elizabeth Baer (LAS ’08), left, senior GIS specialist for Clarke, a global company offering mosquito and aquatic weed control. Baer makes maps for all of Clarke’s U.S. operations: “On a daily basis, I can make anywhere from one to 50 maps. The summer months get especially crazy, as mosquitoes and aquatic weeds are in full force.”

Using a combination of ground surveys and aerial photography, Baer maps areas where mosquitoes are likely to breed or where outbreaks of mosquito-borne diseases have occurred. “We support our crews on the ground in finding locations where they can set traps,” says Baer. “We create pre- and post-treatment maps. Mapping increases efficiency and helps us tread lighter on the environment by understanding our surroundings.”

Sustainability
Geography is at the forefront of sustainability, but again, that concept takes on many meanings for geographers. Sustainability for a geographer might involve environmentally friendly practices, or it might encompass social structures and relationships. Michael Niedzielski (LAS ’03), an assistant professor of geography at the University of North Dakota in Grand Forks, considers himself an urban and transportation geographer.

“I am interested in the relationships between people and transportation infrastructure,” says Niedzielski. “U.S. cities have dispersed, decentralized or sprawled quite significantly. While some people have benefited, others have not.” Citing a 2011 Brookings Institution report, “Transit Access and Zero-Vehicle Households,” which found that only about 33 percent of jobs are accessible by public transit in 90 minutes or less, Niedzielski remarks that “many people are unemployed or underemployed because the jobs are too far away, and they can’t get to them either because they can’t afford a car or the public transit system can’t get them there.” Exacerbating this problem is the inability of people to move closer to their jobs because of affordability or discrimination. Niedzielski focuses his research on understanding differences in commuting and life-work patterns between different socioeconomic groups. “I want to understand how changes in urban structure—where to add new homes and jobs—can improve people’s access to work,” he says.

For Alyssa Hernandez (LAS ’13), “Geography is finding its place in people like me.” Hernandez, a doctoral student in education leadership and policy studies at Florida State University in Tallahassee, is passionate about student-centered education. She was an outspoken advocate for preventive intervention for students with disciplinary problems after she won a seat on the Rich Township High School District 227 school board in south suburban Chicago at age 18. “Where you live actually has an effect on life expectancy, and applying that to education is very revealing. Far too often, it’s your zip code that determines where you go to school, who your classmates are and how much funding you receive,” she says.

Among the challenges Hernandez’s district faced was the changing nature of the population. “The city used to be for the poor, but the wealthy are reclaiming the city,” she explains. “I watched our inner-ring suburban communities change. Now our next-door neighbors come straight from demolished housing projects. It was a scary thing for my neighbors, but not for me. Had I been studying anything other than geography and policy, I would have thought differently; it was unfortunate for the tax base of my school district, but for me as a budding researcher, it was fascinating.”

Elise Hawley (LAS ’13) has pursued her interest in globalization to Chiang Mai, Thailand, where she serves as sustainability coordinator for the Asian branch of the World Fair Trade Organization (WFTO). Her role is to educate new and renewing companies and organizations about the WFTO’s guarantee system for verifying that they are meeting the standards to be named a Guaranteed Fair Trade Organization. She also reviews and analyzes the documentation they submit to receive the designation: “I apply geography in my job by using its critical mindset to analyze how a concept like fair trade can transcend borders while being culturally sensitive, especially for marginalized producers.”

Maureen Sioh, associate professor in the Department of Geography, piqued Hawley’s interest in geography. “I took a freshman globalization class with Professor Sioh and was intrigued by the critical mindset that included all of my interests—environmental studies, history and anthropology,” says Hawley. “I did not want to specialize in one part of academia but rather analyze the overlaps of different majors. Geography was the answer.”

Why geography?
“Geography has been a long time coming, even before I realized I was a geographer,” says Jersha. “I took a class as an elective in my freshman year called Earth’s Cultural Landscape. It really opened my eyes. The way the ideas were presented, the mode of looking at the world through a geographical perspective, understanding how place is constructed through history, culture and geography. The multiplicity of understanding inspired me.”

Hernandez says she was interested in policy from a very young age but discovered geography almost by accident. “My visit to DePaul as a senior in high school put me in a pull-out session that included geography and policy. I remember listening to Winifred Curran, associate professor in the department of geography, give an eloquent speech about how geographers see the world. I was captivated! I thought, ‘That’s how I see the world!’ Ten years ago, I might not have said I was a geographer, but now I know what I’m doing is geography.”

Hawley believes geography holds answers for many pressing problems of the day: “I see it becoming a more sought-after major, especially as people start turning toward a more holistic approach to some of the environmental and social critiques that are making headlines.”

Niedzielski says, “Geography is about pattern and process. As geographers, we try to understand what is where and why. I have my cartography students use GIS to make maps for various community groups in Grand Forks. A recent class created maps for refugee communities to help them find basic services in town.” Further, he believes geography has the untapped potential to help communities help themselves: “There is no limit to the kinds of topics you can study with this spatial approach.” 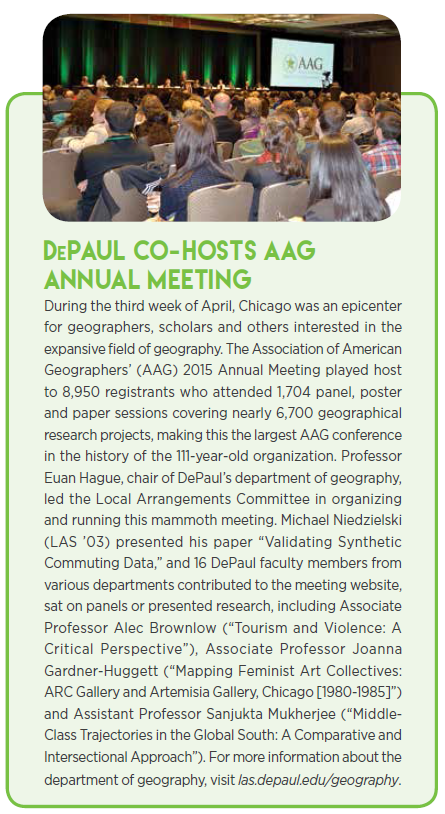