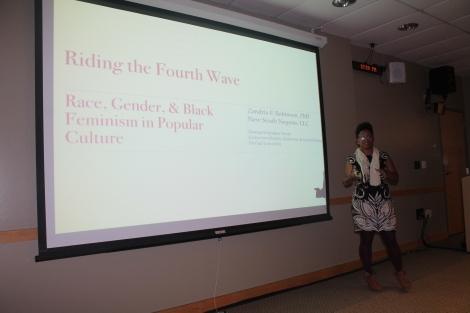 Scholar and author Zandria Robinson delivered her presentation, “Riding the Fourth Wave: Race, Gender and Black Feminism in Popular Culture,” to students, faculty and staff on Oct. 20. The event was sponsored by the Center for Identity, Inclusion and Social Change as part of a series celebrating the 10th anniversary of LGBTQA Student Services and LGBTQ Studies. Robinson, an assistant professor in the Department of Anthropology and Sociology at Rhodes College in Memphis, Tenn., spoke about the evolution of black feminist creative works in pop culture and the impact black feminists had in each generation, from Erykah Badu to Gabrielle Union to Nicki Minaj and beyond.

“Even though [these creative works are] not from the traditional classroom, [they are] intellectual work, nonetheless,” Robinson said. “Singers, artists, rappers, activists and black women in the working classes all participate in this production of contemporary black-feminism pop culture.”

After briefly discussing the misogyny found in 1990s hip-hop culture, Robinson then explored the ways black women artists responded to this issue during feminism’s third wave (the late ’90s and early ’00s), focusing on Erykah Badu and the effect of her music and lyrics.

“Badu has been lauded as the conscience of neosoul music,” she said. “From the beginning of her career, Badu’s lyrics have explored issues of the role of black women throughout history, continuing her ancestors’ discussion of the intersection of race and womanhood.”

Robinson also explored Badu’s impact on the next generation, focusing on Nicki Minaj and Beyoncé and the notion of flawlessness as a form of self-affirmation, as well as the singers’ influence on the current generation, known as the fourth wave, many of whom have taken to the Internet to express themselves. Women like activist and blogger Trudy Hamilton and Crunk Feminist Collective Co-Founder Moya Bailey, who speak on the past and present of anti-black misogyny, have been able to reach a wider audience.

In the fourth wave, black women have greater freedom to consider the intersection of black feminism with communities of racially diverse, LGBTQA and disabled women, as well as others with unique experiences and perspectives within black feminism.

“It’s not that third generation and previous generations of black feminism didn’t have other kinds of movements within them, but the fourth generation has really actively recognized various kinds of black women’s experiences,” she said. “You can find online communities for all these facets.”

Robinson then discussed Janelle Monáe and the intergenerational conversation within her music, as well as black women on TV, such as Gabrielle Union’s portrayal of talk-news host Mary Jane/Pauletta Patterson on BET’s “Being Mary Jane.” The show delves into her professional life as a black woman in the public eye, as well as her personal life and family.

Robinson concluded her presentation with a discussion of what she calls “black feminism 4.0” and how everyone can help increase the visibility of all black women. “The central aims of black feminism 4.0 is to make black women’s experiences visible in our society, including intersections of identities, so we can move forward. We need to engage more critically with the art—more with what’s happening on the Internet and in art to understand change and continuities in black feminist theory and practice.”