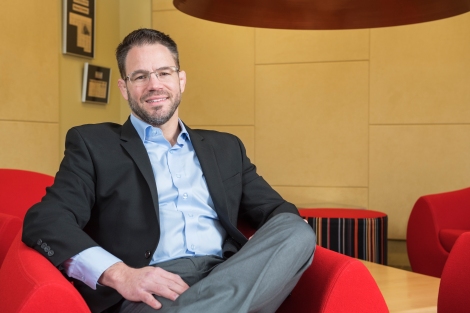 Brent Shiver (CDM MS ’04, PhD ’13) fondly remembers the early days of computing and the interest in what computers do that drew him to create his first program in sixth grade—Sign Your ABCs, which showed the different hand shapes used to create the letters of the alphabet in American Sign Language (ASL). Shiver detoured from that early passion, but good advice, helpful connections and two degrees from DePaul led him back to working with computers and making sure technology is accessible to all.

“Back in those days, everyone thought computing was a geeky thing. Of course, today it’s cool, and software engineering is a pretty hot area,” says Shiver, who became deaf at age two and a half as a result of a bout of spinal meningitis and who now works as an advisory software engineer for IBM Accessibility in Austin.

Shiver first studied psychology at Northwestern University, which he attended on a wrestling scholarship, before pursuing an advanced degree in mental health at Gallaudet University in Washington, D.C., the only liberal arts college in the world that specializes in education for the deaf and hard of hearing. While there, he realized mental health wasn’t the right career path.

“I was trying to figure out what to do, and I remembered my passion when I was younger—computers. So I talked with some friends who were involved in IT and programming,” he explains. He completed a second bachelor’s degree, this time in computer science, and ended up in Chicago working for Lucent Technologies.

When he was searching for a graduate school, Shiver’s friends spoke highly of the College of Computing and Digital Media. He also heard about another deaf student, Karen Alkoby (CDM MS ’99, PhD ’08), who cofounded the DePaul ASL Project, which combines computer technology and linguistics research to bridge the communication gap between the deaf and hearing worlds by working to develop a digital English-to-ASL translator. When Shiver arrived at DePaul, he connected with Alkoby and participated in the ASL Project, as well as worked in Professor Rosalee Wolfe’s ASL research lab.

After Shiver finished his master’s degree, both Alkoby and Wolfe encouraged him to continue on to earn his PhD, which he did part time while working full time at a high-frequency trading firm. He based his dissertation on improving accessibility to online videos, which often are not captioned. “I wanted to see if there was some way to make it better through automatic speech recognition technology, so I tested different techniques to see if deaf users could understand the videos with automatic captioning,” he explains.

That research led him to IBM, where he has been focused on accessible technology and software, an ever-changing field. “In the past, it was very easy to have screen readers go through web page text and then have the audio description come out. Now, web language has changed and complex coding means many materials online are not accessible, which causes deaf, hard-of-hearing and blind individuals to fall farther and farther behind,” he says.

Accessible technologies are designed to even the playing field, and Shiver encourages programmers to look into the growing field. “You’ll definitely make a difference to a population that quite often is ignored or forgotten,” he says. “There’s a need for individuals who really understand how to design software and user interfaces appropriately from the beginning. It’s very expensive to go back and make changes to make technology accessible.”

Shiver’s role at IBM recently shifted from accessibility compliance in Boston to software development in Austin. He and his wife are looking forward to immersing themselves in Austin’s large deaf community, and he’s glad to get back to his computing roots. “I enjoy coding—that’s my passion,” he says. “I like to see my pieces getting used to help make things easier and better for people. That’s what inspires me—to see that my work is being used.”

Access other feature articles from the summer issue of DePaul Magazine under the Magazine tab on the homepage or through the flipbook. >>